U.S. Airman Describes ‘Once in a Lifetime’ Rescue Of Thai Soccer Team From Cave 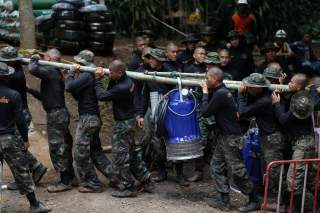 The rescue of twelve boys and their soccer coach from a cave in Thailand was, by any measure, an extraordinary feat. The weeks-long operation involved the expertise of local law enforcement and military specialists, including the vaunted Thai Navy SEALs who led the rescue operation, as well as hundreds of doctors, specialists, and volunteers from around the world. There are heroes here, and they are magnificent.

Among those heroes is 32-year-old U.S. Air Force Master Sgt. Derek Anderson, one of the dozens of U.S service members from the 353rd Special Operations Group and the 31st Rescue Squadron dispatched from their stations in Okinawa, Japan, to assist with the rescue operations.

Anderson described his participation in the “once in a lifetime” rescue operation in an interview with the Associated Press:

- Heavy rainfalls made catastrophe imminent when U.S. military personnel first arrived at the cave on June 28, Anderson told the AP: “The cave was dry when we arrived, and within an hour and half it had already filled up by 2 to 3 feet and we were being pushed out.”

- “That was just in the very beginning of the cave and at that point, we realized this problem is going to be much more complex than we thought,”Anderson told the AP. “The long-term survivability of the boys in the cave was becoming a less and less feasible option.”

- According to the AP, the international contingent of divers rushed to practice rescue techniques “in a swimming pool with local children about the same height and weight” as the trapped boys, with a focus on keeping each boy “tightly packaged” during the hour-long journey through freakishly tight underwater passages with zero visibility.

- “In this type of cave diving, you have to lay line, rope, that’s your lifeline. You have to ensure when you go in you have a way out,” Anderson told the AP. Rescuers “were making progress, but it was very little progress and they were exhausting themselves spending maybe five or six hours and covering 40 or 50 meters (yards).”

-Anderson described the group of boys and their coach as “incredibly resilient” during their two-week wait before the day of their extraction: “What was really important was the coach and the boys all came together and discussed staying strong, having the will to live, having the will to survive.”

The entire prospect of the rescue must have been terrifying for those kids. As Business Insider reported on July 8, each boy had to traverse some 2.5 miles outfitted with oxygen tanks and tethered to the seasoned divers; even though just over half a mile of the trip was underwater, the children wore tanks and, in Anderson’s telling, full-face positive-pressure masks that were “really crucial” in keeping oxygen flowing, even if the boys panicked underwater.

“We were extremely fortunate that the outcome was the way it was,” Anderson said. “It’s important to realize how complex and how many pieces of this puzzle had to come together… If you lose your cool in an environment like that, there is a lot of bad repercussions.”

Image: Military personnel carry a water pump machine as they enter the Tham Luang cave complex, where 12 boys and their soccer coach are trapped, in the northern province of Chiang Rai, Thailand, July 6, 2018. REUTERS/Athit Perawongmetha