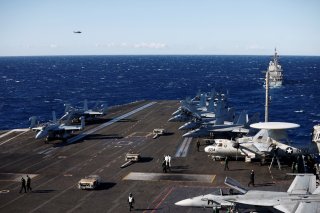 After years of testing, the Navy’s breakthrough electromagnetic catapult is now integrated into the service’s new generation of Ford-class carriers.  Beyond the benefits of smoother launches, America’s aviators can now carry out more maritime air assault sorties without wearing out their airframes.

The Electromagnetic Aircraft Launch System (EMALS) is drawing greater interest from U.S. allies, and given the advantages of dual carrier interoperable missions, the United States should seize this moment to strengthen global deterrence by providing the technology to trusted partners.

Late last year, the U.S. State Department approved the sale of the system to France—a clear step toward strengthening NATO’s deterrence in the European and Mediterranean theaters. There could also be enormous tactical and strategic benefits from extending EMALS collaboration to Japan, South Korea, Australia, and India. With the EMALS, these partners could collectively enhance power projection in the Pacific while distributing the load between each ally. As tensions rise from Ukraine to Taiwan, that enhanced strength is sorely needed.

After years of scientific research, innovation, and testing, the system has now proven to be an operational success. Last year, in a key milestone, the Navy and General Atomics Electromagnetic Systems reached 8,000 carrier launches with the system.

If fighters can fly more sorties, they are able to dwell longer and adjust their attacks should new intelligence or targeting information arise. Joint carrier operations can also improve the chances that an air campaign will be able to destroy, overwhelm, or defeat enemy air defenses.

Just last week, the Navy performed dual carrier training operations in the Pacific in order to demonstrate readiness. Notably, these exercises involved command-and-control and sortie generation coordination, both of which are key measures of interoperability.

Another less recognized advantage is the system’s adaptability. This can allow EMALS to support amphibious assault ships or low-cost, attritable aircraft for which building runways is cost-prohibitive or not possible due to challenging terrain. In addition, U.S. allies without aircraft carriers could consider EMALS for other surface ships. Should it come to fruition, this would massively expand power projection capabilities and bolster allied global deterrence posture.

This kind of combined power could strengthen the deterrence posture of the United States and its allies vis-à-vis China.

Outside of the obvious tactical benefits, there would also be notable economic benefits for U.S. allies. By taking advantage of a system that the United States has already spend billions on, allies would be able to upgrade their naval power projection capabilities without having to invest in development.

As electromagnetic propulsion greatly reduces strain on airframes, a joint EMALS partnership could also reduce maintenance and sustainment costs for allies and partners.

As EMALS is engineered to be both steady and tailorable, it can be adjusted for different aircraft weights and configurations. This is particularly valuable because the amount of thrust required varies depending on a complex range of interwoven factors, including airframe size and shape, the wind speed, and the speed of the aircraft carrier itself.

General Atomics is already delivering EMALS for the second and third Ford-class carriers. These capabilities will strengthen the strongest link in America’s chain of deterrence. It’s time to help allies and partners do the same.