U.S. and British Forces Train in Poland Amid Tensions in Eastern Europe 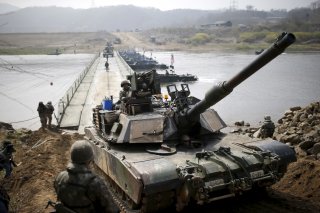 Training exercises between U.S. and British forces in Poland have put the "special relationship" between the United States and the United Kingdom on full display. Soldiers from the U.S. Army's 2nd Battalion “Dreadnaughts,” 34th Armored Regiment, 1st Armored Brigade Combat Team, and 1st Infantry Division have been deployed to the Drawsko Pomorskie Training Area (DPTA) in Poland, where they will teach their British counterparts about American tracked vehicles and discuss similarities and differences between how the two forces operate.

According to U.S. Army Europe and Africa, comprehensive interoperability remains vital. In past training exercises, junior enlisted soldiers from both U.S. and British Armies “discovered quite a bit in common about their roles in and around tracked vehicles.”

Last October, British troops from The Royal Dragoon Guards, Black Horse Troop met the Dreadnaughts during exercise Victory Eagle, a multinational training exercise hosted by the Polish Land Forces that aimed to enhance tactical and operational interoperability. Since then, British soldiers have continued the conversation with the Dreadnaughts and have been interested in returning to DPTA to learn more about allied tanks.

"After the exercise we kept in touch … and set up the training," explained Cpl. Stuart Higham of the U.S. Army. "It's been great," Higham added.

Both the United States and the United Kingdom have committed to sending even more troops to Poland as part of their response to Russia's military buildup on the Ukrainian border. Last week, London announced that it would send an additional 350 troops to Poland, which will bolster the 250 British Army soldiers already there. 150 of the British forces in Poland are part of an existing NATO multinational protection force, and 100 others are engineers helping Warsaw strengthen its borders with Belarus.

Last Friday, the Pentagon ordered 3,000 more soldiers from the 82nd Airborne Division to deploy to Poland as tensions continued to mount over a possible Russian invasion of Ukraine. They will join the 1,700 soldiers from the same unit who began arriving in Poland earlier in the week.

"At the direction of the President, Secretary Austin today ordered to Poland the remaining 3,000 soldiers of the 82nd Airborne Infantry Brigade Combat Team based at Fort Bragg, N.C.," said a senior U.S. defense official. "These troops will depart Fort Bragg over the next couple of days. They are expected to be in place by early next week."

"The extra fighters will bolster readiness and Allied deterrence and defense as Russia continues military build-up in and around Ukraine," a statement from U.S. Air Forces in Europe and Africa said.

Even as additional troops and aircraft head to Poland, the White House has urged all American citizens to leave Ukraine.