U.S. and Its Allies Must Focus on Access Denial Against China’s Military 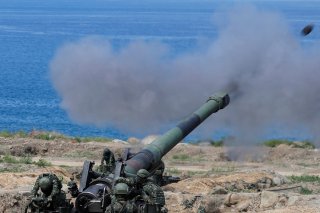 “If China is going to start a war, they are going to do it on their terms. All of our wonderful stuff won’t get there in time. You need to get your stuff there on Day Zero of the fight,” Adm. James “Sandy” Winnefeld, a former Vice Chairman of the Joint Chiefs of Staff, told me last fall.

China has escalated “gray-zone” attacks against Taiwan in recent months. “Gray-zone” activity advances a state’s objectives outside the realm of accepted diplomacy, but below full military conflict. This can include disinformation campaigns, political or economic coercion, cyberattacks, or using proxies.

The United States, Japan, Australia, and other regional allies should counter Chinese gray-zone provocations with ones of their own. They need to have military assets at sea, in the air, and on the ground on Day Zero, or Taiwan would be quickly seized in the event of a People’s Liberation Army (PLA) invasion.

Beijing may be deterred if it is clear that moving its naval and air force assets to attack Taiwan puts them at risk of humiliating losses. Placing equal and opposite pressure against the Chinese regime is the only way to keep its aggression at bay. The Chinese Communist Party doesn’t respect weakness.

The United States and Japan can play a key role in the area of deterrence. Taiwan has one of the freest democracies in East Asia. Its government has been a friend to the United States since World War II when American fliers signed up with the Flying Tigers to help it resist the Japanese occupation. Allowing the Chinese Communist Party to occupy the island and jail its democratically elected leaders would leave an indelible global blot on U.S. credibility. It would tell our allies including Japan, Australia, South Korea, Poland, and the Baltic States that U.S. mutual defense commitments are worthless.

The Chinese Communist Party-linked Global Times noted that the PLA counts on air supremacy to keep aid from reaching Taiwan in time; consequently, it’s essential for the United States and its allies to quickly gain the upper hand in Taiwanese airspace.

Recent People's Liberation Army Air Force (PLAAF) exercises in this area with fighters, anti-submarine warfare aircraft, KJ-500 early-warning aircraft, and H-6K bombers suggest this could be part of its strategy.

Japan could help prevent this. The Japanese island Yonaguni, located approximately 120 miles off the east coast of Taiwan, already has a long-range radar station. The island could act as an unsinkable aircraft carrier, closing off Taiwan’s east coast from naval assaults or a blockade. The U.S. military could consider deploying a ground-based version of its Long-Range Anti-Ship Missile (LRASM) to deter Beijing’s surface combatants.

The United States should also consider developing longer-range anti-aircraft missiles that could saturate Taiwan’s airspace from Yonaguni, not unlike Russia’s S-400 missile defense system that has a 250-mile range. Its current Patriot anti-aircraft missile has a mere forty-six-mile range, which is inadequate for deterrence. The uprated system would help the U.S. Air Force in areas where it faces peer-level competition from either Russia or China. A longer-range surface-to-air missile (SAM) could deny access to aircraft flying in Taiwan’s airspace and over international waters off Taiwan’s coast.

To test this theory, I ran a simulation in Command: Modern Operations, a war game used by defense professionals and the Department of Defense. I placed an S-400 on Yonaguni due to the lack of a comparable U.S. or Japanese surface-to-air missile system, and it knocked out PLAAF H-6 bombers and other PLAAF early warning aircraft over waters to the West of Taiwan.

Fighters launched from Yonaguni would be minutes from Taiwan’s airspace and would threaten the PLAAF’s effort to gain air supremacy. If Yonaguni’s airstrip was upgraded for use by allied F-35 stealth fighters, F-16s fighter jets, and airborne warning and control system (AWACS) aircraft, it would force PLAAF to face better-trained American pilots.

A few of the northernmost islands in the Philippines have a similar strategic position vis-à-vis Taiwan. The Filipino island of Itbayat is a mere ninety-seven miles from Taiwan and could be also used as a base for long-range anti-ship and anti-aircraft missiles to deny the PLA access to the southernmost approach to Taiwan.

It would also require improving missile defenses, however. If the Navy and PLAAF were not enough, the PLA would likely target the island with intermediate-range ballistic missiles (IRBMs) such as the DF-21 and DF-26.

Japan and the United States should counter Chinese drills near Taiwan with ones of their own to send the message that any attempt to seize Taiwan by force would go badly for China.

The United States, Japan, Australia, and possibly the British Royal Navy, Indonesia, and Malaysia should consider having a major naval exercise in Japanese waters near Taiwan and sink a target ship to show Beijing that its fleet would be putting itself in peril. Considering that Beijing has invested considerable capital in its new aircraft carriers and amphibious assault ships, perhaps the U.S. Navy should consider towing the USS Bonhomme Richard to the area and sinking it as a target.

The U.S. Navy also needs to have regular submarine patrols through the deep waters of the Taiwan Strait and in the waters surrounding Taiwan, not unlike during the Cold War when U.S. attack submarines operated off Russia’s northern coast.

The threat of a vicious response to aggression on the part of Beijing must be real, imminent, and immediate. Otherwise, Beijing will take Taiwan and U.S. military dominance in the region will permanently end.