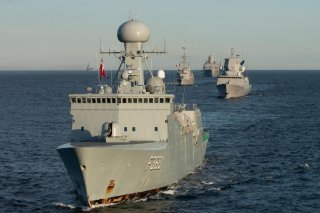 On land, American and British Marines practiced ship-to-shore operations via helicopter, tactical aircraft, and personnel recovery, and worked together during simulated visit, board, search, and seizure (VBSS) operations.

“Northern Viking 22 has been incredibly successful for us and for the participating Allies,” the deputy commander of Keflavík Air Base, Cmdr. Marvin Ingólfsson, explained in a statement covering the exercise released by the United States Navy.

“We have learned from each other these last two weeks and we have shared tactics and procedures, improving our ability to operate together in the defense of Iceland and of the lines of communication that run through this area.”

The exercise, which began on April 2 and finished on April 14, concentrated on ensuring protection for Keflavík Air Base’s critical infrastructure. The participants protected an airbase during the training and created an ersatz fueling position for allied aircraft.

“It's good to have a go at actual events and the training is vital for us. We learned that [different EOD teams] differ a bit, but they’re close - so we can work really well together.”

An essential aspect of the exercise was improving familiarity with foreign militaries and the harsh cold environmental conditions and geography in Iceland’s far north.

Iceland forms a vital part of the GIUK Gap, a maritime choke point between Greenland, Iceland, and the United Kingdom. The GIUK Gap allows vessels in the North Atlantic to transit in and out of the Norwegian Sea.

During World War II, the gap was a breakout location for German warships and submarines intent on plying Atlantic waters. Likewise, during the Cold War, Soviet submarines faced virtually the same geographic challenge as Nazi Germany’s navy, since the passage was the only route to the Atlantic from bases in the far north.

Although the Russian Navy is a shell of what it used to be—the Russian Navy recently suffered an embarrassing loss of the Moskva, their Black Sea flagship, after it was struck by an anti-ship missile off the coast of Ukraine—the GIUK Gap would continue to be an essential area if a war between NATO and Russia broke out.