The U.S. Army’s Experimental “Multi-Domain” Units Are Practicing How to Battle Chinese Warships 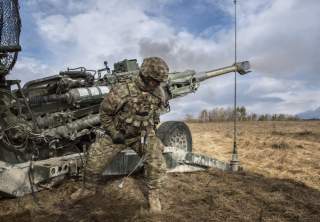 The Navy’s biannual Pacific Rim naval exercise (or RIMPAC) is the Met Ball of naval warfare: Every two years, dozens of advanced warships and aircraft from over twenty nations in good standing with Washington flock to Hawaii to participate in weeks of naval exercises.

Amidst invitees such as the Vietnamese People’s Navy and the Tongan Maritime Force, arguably the most exotic invitees to the 2018 sea-warfare gala was a rocket artillery unit from the U.S. Army’s 17th Field Artillery Brigade.

That year’s exercise climaxed with the seemingly ritualistic sinking of the retired Navy Landing Ship Tank USS Racine, which was battered with torpedoes, missiles—and Army artillery.

Under the command of a naval officer, an 18-ton M142 HIMARS rocket-launching truck on Kauai, Hawaii unleashed its six 227-millimeter GPS guided rockets on the Racine from 60 miles away, using targeting data transmitted via Link-16 datalink and an Army MQ-1C ‘Gray Eagle’ drone.

Army media reported the rockets hit the LST, though drone footage of the attack appears to show the projectiles splashing down in the surrounding waters without effect. Pointing out that the rockets exceed the usual maximum range of the HIMARS, The Drive’s Joseph Trevithick speculated that a new munition may have been undergoing testing.

Successful or not, the strike on the Racine spotlighted the Army’s brigade-sized Multi-Domain Task Force—at the forefront of an ambitious experiment to reinvent the Army so that the same unit based on remote Pacific islands can sink ships and combat deceptive internet propaganda.

Currently, the Army has two experimental brigade-sized Multi-Domain Taskforces. The first unit founded in 2017 has 2,200 personnel, including a permanent core of 500 to 800. Based around the 17th Field Artillery Brigade, it includes two battalions of HIMARS launchers and has been performing tests in the Pacific.

In 2019, the Army began standing up a second unit in Europe, based on the 41st Artillery Brigade, which is equipped with larger M270A1 multi-rocket launcher systems.

Army officers waxing lyrically on the theory behind Multi-Domain warfare can sometimes sound like non-stop font off buzzwords. Fundamentally, the concept is about down traditional barriers between, and within, the armed services and integrating cyber and space capabilities.

Historically, different warfighting capabilities have been highly institutionally segregated, and competed for funding by advancing their own self-centered theories of warfighting.

This proved more and more problematic as various arms regularly had to work closely together in modern battlefields. Therefore, the trend throughout the twentieth century was to integrate once independent combat arms into operational combined arms units.

Furthermore, the Army sees these units as being equally engaged in confronting adversaries before hostilities break out via intelligence gathering activities, and psychological and information operations. In theory, doing so proactively before fighting breaks out may deter a war from occurring in the first place.

But high-minded rhetoric aside, the most easily graspable product of the Multi-Domain project seems to be units able to deploy to small Pacific islands—or even the decks of Navy ships—and threaten nearby ships with missiles.

Indeed, China and Russia have already effectively modeled how long-range land-based missiles like the DF-21D anti-ship ballistic missiles and the S-400 surface-to-air missile can create Anti Access/Area-Denial (A2AD) “bubbles” with radii potentially measured in the hundreds of miles.

Practically, the ability of Army rocket artillery to threaten ships will remain limited until it introduces Precision Strike Missiles with a range exceeding 300 miles and a proper anti-ship seeker’ in the early 2020s. Additional types of anti-ship missiles, army helicopters and air defense artillery, as well as ground-based security elements, are also logical additions to an operational Multi-Domain unit in the Pacific.

The cynic’s take on the Multi-Domain concept is that it’s simply the Army trying to find ways to justify its relevance in the United State’s growing confrontation with China primarily in the air and at sea. While the Air Force supports the Multi-Domain concept, the Navy hasn’t fully extended its blessing, denying it status as a fully inter-service initiative. You can read a measured critique from a naval officer here.

However, there’s an old chestnut: “A ship’s a fool to fight a fort.” Today, both the ship and metaphorical “forts” can shoot at each other over hundreds of miles—if they can detect each other.

While land-based assets may not be able to maneuver as freely as aircraft or ships, they are cheaper and far easier to conceal with terrain than the latter two operating featureless expanses of cloud and sea.

While some analysts argue that A2AD’s kinetic capabilities are overhyped, they may still funnel adversaries into predictable corridors, or assist nearby air and naval forces engaged in battles of attrition by helping detect and pick off enemy missiles, aircraft and warships.

“Before, we couldn’t penetrate A2/AD. With it, we could,” Gen. Robert Brown said of the task force’s performance in “at least 10 exercises and wargames…we could impact their long-range systems and have a much greater success against an adversary.”

The Multi-Domain seemingly mirrors Chinese strategy with a few twists. One may be using aviation to allow the firing units to maneuver (possibly hopping islands) to avoid inevitable counterstrikes.

Another is to integrate intelligence-gathering assets directly into the firing brigade, facilitated by new cumbersomely named Intelligence, Information, Cyber, Electronic Warfare & Space battalions (I2CEWS)—perkily dubbed ‘eye-two-cues.’ In January 2019, the first I2CEWS unit was formed for service in the Pacific and another will be established in Europe.

The first phase of the Multi-Domain program is targeted for completion in 2028. Eventually, the Army foresees integrating Multi-Domain warfare all the way down the echelon even to small company-sized combat units.