The U.S. Army’s Optionally Manned Fighting Vehicle Must Be Revolutionary 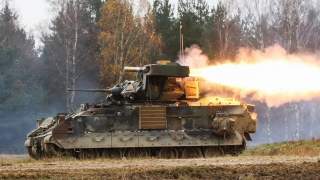 While the particular state of the Army’s Optionally Manned Fighting Vehicle competition may seem somewhat tangled and uncertain, there does appear to be an unambiguous, aggressive Army intention to field a new infantry fighting vehicle that breaks new ground -- when it comes to lethality, protection, deployability, speed, firepower and AI-enabled sensing. Of equal significance, the Army seeks a vehicle “soon,” which can be upgraded effectively.

Some are raising the question as to whether the clarity or focus of this vision could be impaired by the apparent disqualification of the Raytheon-Rheinmetall Lynx vehicle. If, according to reports, the Army disqualified the Lynx for missing the delivery deadline, then only General Dynamics Land Systems remains as the sole bidder. Some are raising the question about having just one vendor initially bidding and submitting early prototypes for the program will compromise its success. This criticism, however valid, merits further exploration given the significance of the program for Army modernization.

Initially, there are several pressing or self-evident elements to this. First, competition for the program will not disappear. The Army plans a full and open production competition for 2023, so no vendors will be discouraged or limited when it comes to evolving, testing and maturing a vehicle. Secondly, the Army asked industry to invest, innovate and engage in dialogue -- something which may have been done to varying degrees. It introduces a pertinent question: should Army or industry progress be stalled or complicated in some way when there might not be full clarity regarding vendor participation may change?

Furthermore, timing on the program, per Army strategy, is very significant; remember, this program was initially envisioned as an effort to deliver vehicles as far away as the early 2030s. However, the speed and danger of emerging threats inspired the Army to move up the timeframe for operational status by as much as a decade. Executing this accelerated vision of course hinges upon leveraging promising new innovations and commercial off-the-shelf available technologies -- in the near term.

The strategy, as refined by the Army, seeks to both introduce unprecedented combat capability while also bringing many “available now” and “ready to be produced” technologies. With this in mind, many vendors such as General Dynamics and Raytheon-Rheinmetall have "dug deep" to leverage innovations. For instance, General Dynamics innovators, engineers and weapons developers have been spending recent years building prototype Griffin vehicles and other combat subsystems to engage in dialogue with the Army about what they would most like to see. Much of this GD strategy was aimed a soliciting and incorporating the Army’s vision for the new platform. The service has conducted a clear and open competition, and, for their offering, GD developers sought to emphasize the key priorities outlined by the Army, to include 3rd-gen FLIR, Lethality, Optics, Growth Potential, Protection and Transportability.

There are many merits to an approach of this kind, not the least of which are the efforts to demo, test and refine promising near-term technologies. Secondly, a nearer term, produceable vehicle such as the offering General Dynamics and R&R have evolved makes a lot of sense for several reasons. Essentially, many of the most impactful and yet-to-exist combat vehicle technologies are already here in some respects…. and, of even greater relevance, many of the anticipated future breakthroughs such as new AI-empowered algorithms, advanced sensors, autonomy, EW and cyber weapons developments and other weapons adaptations - “can” be added quickly as part of an evolving modernization trajectory for vehicle that is built “now.”

Many of the more immediate technological breakthroughs are expected to come in the form of algorithms, software, networking and sensing - not to mention EW and cyber. This means the best and soonest upgrades may not be hardware intensive, something which enables an existing platform to be brought to paradigm-changing levels of combat capability quickly without huge amounts of “bending” new metal. This bears upon GDs recent experience of prototyping, testing and demonstrating state-of-the-art and emerging combat vehicle weapons technologies. Any vehicle built now, in short, could become almost entirely new in some respects with new weapons and hardened networking creating a combat-web of nodes connecting with drones, helicopters, tanks, dismounted soldiers and even ships and aircraft in multi-domain operations.

Fast-progressing AI-enabled autonomy will likely enable the vehicle to simultaneously control a small fleet of attack-sensor drones increasingly capable of performing key functions independently. This is a combat multiplier as it will ease the “cognitive” burden upon crews while also bringing new weapons and hardware. Information itself is expected to become a larger “weapon of war,” further reinforcing the merits of a GD strategy aimed at moving quickly and refining the most cutting edge technologies on demo vehicles over the course of several years.​​

GD has much experience with this, as one need only to look at its 1980s era Abrams tank. Today’s Abrams, by even the most cursory examination, is not your tank of the 80s. Upgrades and adaptations have made it an entirely new vehicle. For instance, over the years the Army and GD have added - 3rd-Gen FLIR, Active Protection, Auxiliary Power Units, Multi-Purpose 120mm rounds, digital ammunition loading, ammunition data links, additional underbelly armor protections, massive amounts of electronics, thermal imaging, targeting sensors, computing and C4ISR systems - to cite a few.

Interestingly, while the Abrams naturally has ultimate size, weight, power and mobility limits, much of the current thinking is that -- with continued modernization -- it may not go anywhere soon. Although unable to deploy easily or travel over some bridges, the protection, power and combat effectiveness of the Abrams is, according to many … “here to stay” for a while.

Finally, many kinds of promising lightweight composites are already being engineered into new vehicles and showing great progress; AI-enabled drone autonomy is not only already here but easily upgradeable on current systems; new sensors can integrate quickly into existing chassis’; and advanced “networking” technologies between air, ground and maritime assets are fast emerging and able to integrate. While some elements or infrastructure of a vehicle chassis built now or over the next few years may not easily be removed, it will still be possible to integrate effective lightweight composites in future years. They could be added as extra protection or blended with new weapons systems. In effect, there is also hardware which can continue to upgrade.

The Army will benefit from staying on course with its current path, regardless of which vendors continue - as it is an auspicious and much needed one.