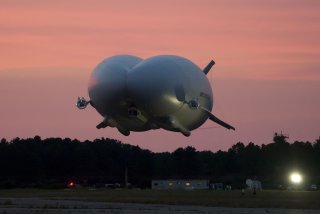 Parts began arriving at a massive, World War II-era government airship hangar in Lakehurst, New Jersey, for final assembly. The components were “massively overweight,” the insider said — and as a result the airship would be capable of staying aloft for just four days instead of three weeks, as the Army had promised.

In November 2011, panicked managers from the Army, Northrop and HAV met in the U.K. It was clear that the original 18-month schedule would have to be revised, as would LEMV’s ambitious performance specs. LEMV’s first flight, originally slated for no later than December 2011, was bumped back to an unspecified date in mid-2012. The much-hyped combat trial in Afghanistan was deferred indefinitely.

The collapse of the Pentagon’s other airship effort in early 2012 increased the pressure on LEMV at precisely the moment the latter program was struggling the most. After two years of work costing more than $200 million, Blue Devil was 95 percent complete, inflated with $350,000 worth of helium, gently bobbing in Mav6's North Carolina hangar awaiting the installation of cameras and radios.

Blue Devil's demise left LEMV as the military’s only major airship program. But the Army airship was suffering all the same problems that had plagued the Air Force model, albeit in near-total secrecy. The Air Force had publicly criticized Blue Devil's troubled development. By contrast, the Army and Northrop cheerily reported only steady progress on LEMV despite repeated delays. “We’re about to fly the thing!” Northrop spokesman K.C. Brown, Jr., crowed in May 2012.

Six tons overweight, tens of millions over-budget and months late, the first LEMV took off for its debut flight that August. For 90 minutes the football-field-length airship motored at low altitude over the forests and fields of central New Jersey, returning as the sun was setting. Although meant to be robotic, for the initial flight LEMV had a pilot aboard.

“LEMV was designed, built and flown in a short 24 months, a considerable accomplishment for a vehicle of this scale and complexity,” Northrop boasted in a statement — as though a mere six-month delay (it was actually nine months) weren’t a total disaster for a program sold on the promise of an 18-month development.

Word within the Army was that it would take another year and an extra $60 million to shave off weight, install more equipment and prep the LEMV for a second test flight in New Jersey — never mind operational missions over Afghanistan.

The additional delay could not have come at a worse time. After 11 years of fighting , the war in Afghanistan was winding down. Budget cuts were forcing the Army to cancel all but the most critical weapons programs. “I kind of knew … this thing wasn't going back up again,” the LEMV insider said.

Among junior program staff, conversations turned to what-ifs. What if the airship had been developed earlier — say, 2005 or 2006 — instead of nearly a decade into the war? What if the Army had been realistic about the time and cost of assembling the airship? What if experienced program managers had been in charge?

What if the Pentagon had been able to get a new airship — any new airship — off the ground, for real? Under his desk in Washington, D.C., the program insider kept a box containing miniature foam replicas of the LEMV, toys for handing out at trade shows. The tiny scale LEMVs would soon be among the only evidence the Army had even wanted a giant, robotic spy blimp.

For nearly another six months after LEMV’s first flight, the program was pretty much in limbo, its fate obvious but never officially stated. The intel staff made half-hearted overtures to ASA-ALT asking if the managers there could maybe find more money for LEMV, but ASA-ALT, previously scorned by the intel staff, blew off the requests.

And in February 2013, Legere, the intel chief, called 900 of her staffers to a meeting in the Pentagon to talk about budget cuts, including the possibility of furloughs. Toward the end of the discussion Legere surprised everyone by bringing up LEMV, the insider recalls.

“Some of you may have heard we are going to cancel this project,” Legere said, according to the insider. “You would be correct. Let me tell you all something. I’d rather pay you all of your money than allocate funds for this ridiculous, stupid project again.”

LEMV was dead. And with it, any chance the Pentagon had to acquire a next-gen airship. The prototype was deflated in late May 2013, its pricey helium venting into the air, impossible to recover. HAV, the British airframe-maker, began negotiating with the Army to buy back the blimp components for the company’s own use.

Afterward, the Army tried to distance itself from the program’s failure, portraying LEMV mostly as a victim of circumstance. “With the reduced U.S. presence in Afghanistan coupled with the technical challenges and limitations of constrained resources, the Army made the determination to discontinue the LEMV development,” service spokesman John Cummings said.

But the insider had a different view. “Army management at the highest levels failed LEMV.” And failed the entire concept of a future war blimp.