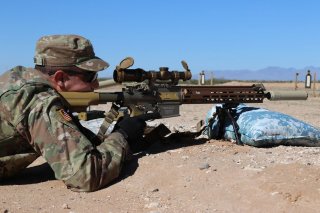 This week the United States Army announced that combat units have begun to receive the first of thousands of the new Heckler & Koch Defense Inc.'s M110A1 Squad Designated Marksman Rifles (SDMR). While the exact number of new SDMRs was not noted, the shipment was the first of many that will eventually total between 5,000 and 6,000 complete weapon systems.

The M110A1 SDMR is a variant of the 7.62mm H&K G28/HK417. It was selected as part of an interim effort to make squads more lethal ahead of the service's introduction of the Next-Generation Weapon system, which is planned for 2023, Military.com reported.

Under terms of the contract with the U.S. Army, the rifles are being manufactured by H&K in Oberndorf, Germany and are then shipped to the HK-USA facility in Columbus, Georgia. There, HK-USA workers install scopes and mounts purchased by the U.S. Army under a separate agreement – and additional accessories sourced from twelve other U.S.-based manufacturers are also installed to complete the SDMR weapon system.

"Obviously, the COVID-19 pandemic creates a very challenging business environment," said HK-USA President and COO Michael Holley. "But as an essential partner in the defense infrastructure of this country, we are 100 percent committed to delivering this essential product to our troops, while keeping our employees safe and healthy. We have many of the best workers in the small arms industry, both here in Columbus, Georgia and in Oberndorf, Germany, working together to make this happen."

The new H&K M110A1 is entering service to replace the Enhanced Battle Rifle 14, a modernized M14 that has been used by infantry squads in Afghanistan and Iraq.

"The HK SDMR system will add much-needed capabilities to virtually every squad in the Army," added Holley. "We are honored by this opportunity."

The new rifle will be issued to the designated marksman, who is tasked within an infantry squad to engage targets out to about 600 meters, thus extending the reach of the unit beyond that of their service rifles Stars & Stripes reported. And unlike snipers, who often act independently, designated marksmen normally operate as part of the fire team. The other notable difference is that designated marksmen are issued with automatic or semi-automatic weapons, in contrast to snipers who generally use specialized bolt-action rifles.

H&K is also one of three companies working with the U.S. Army towards the development of the Next Generation Squad Weapon (NGSW), salted to fire a special, government-produced 6.8mm projectile that could offer higher velocities at greater ranges. That program is meant to develop an automatic rifle that would replace both the M4 Carbine as well as the M248 squad automatic weapon (SAW). The Army expects to receive prototypes of the new NGSW this summer.