U.S. Army Developed a Cannon That Can Destroy a Target at Nearly 40 Miles 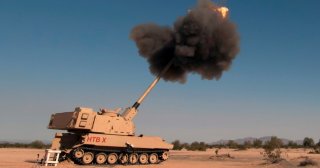 The purpose of artillery has always been to hit a target at extreme distances, and this month the U.S. Army demonstrated a precision-guided artillery projectile that had an effective range of 39.8 miles during a live-fire exercise earlier this month at the Yuma Proving Grounds in Arizona. That is the distance between Washington, D.C. and Annapolis, Maryland.

At the demonstration on March 6, two shots were fired from the Army's M1299 155mm self-propelled howitzer, which was developed under the Extended Range Cannon Artillery (ERCA) program. The new weapon system, which is still in development, was able to double the range of a Raytheon-made Excalibur extended-range artillery shell by utilizing a modified M777 howitzer with a supercharged propellant and XM1113 rocket-assisted projectile.

The system features an upgraded breach and metallurgy of the tube, along with changes to the hydraulics and a new ramjet projectile. This added about 1,000 pounds to the overall weight of the weapon, while the cannon barrel was extended by about six feet.

"It enables commanders to attack their fight differently, provides them a number of weapon systems besides attack helicopters and unmanned aerial systems to go after targets that are further down the battlefield, deeper as we like to call it, in the battlefield," Gen. Joseph Martin, vice chief of staff of the Army, told reporters following the demonstration as reported by FoxNews.

What is notable about this new system is that while the range has increased, the weapon is still extremely accurate. The M1299 fired at a tan sports utility vehicle and rounds landed within a meter of the Suburban. The ERCA is thus seen as an improvement in the latest version of the Paladin self-propelled howitzer, which is able to provide indirect fire. The M1299 will also incorporate a fully automated ammunition loading system that will increase the rate of fire from three to 10 rounds per minute.

A long-range cannon could provide the U.S. Army with a weapon that could remain well outside of the range of enemy artillery, yet be able to respond to those spreads and even open windows of opportunity to advance on enemy-held positions.

Long-range cannons are not a new concept, and during the First World War, the German Army produced the legendary "Paris Gun," which able to bombard the City of Lights from 75 miles away. It had the longest range of any artillery weapon in history and was able to launch explosive rounds weighing in excess of 230lbs on the city. Each round was launched upwards of 25 miles in the air, the highest point ever reached by a man-made object up to that point.

However, because each round could only hold 15lbs of explosives and just 20 rounds could be fired per day the Paris Gun was only able to do minimal damage. The other problem was that the targeting was far from precise – and because Parisians couldn't hear the launch of the rounds many assumed the city was being bombed.

While the M1299 won't match the 75-mile distance of the Paris Gun – at least not yet – those rounds will be far more accurate on enemy positions.

Peter Suciu is a Michigan-based freelance writer who has contributed to more than four dozen magazines, newspapers, nd websites.