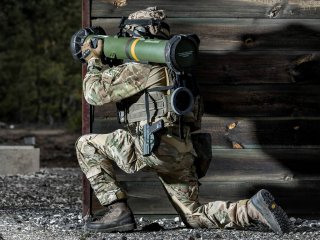 The U.S. Army is looking for new technologies and increasing lethality for the future battlefield. As it is assessing advanced technologies it got a look at Israel’s Spike SR, a short-range anti-tank missile from Rafael Advanced Defense Systems. “As a portable, electro-optical guided missile, designed for today's modern infantry, Spike SR is especially well-suited to enhance soldier lethality, one of the six priorities,” Rafael said. This assessment was the first live-fire demonstration of SPIKE SR on U.S. soil.

The live-fire demonstration is part of the US Army Expeditionary Warrior Experiment 2021. The AEWE looks at “cross domain maneuver” capabilities in support of “multi-domain operations,” according to a U.S. Army explanation. That means expanding lethal and nonlethal capabilities for small unit modernization. The live-fire demonstration shows the missile striking vehicles and blowing them up accurately. “We were greatly honored to present the advanced SPIKE SR missile system for assessment by the AEWE team. This light-weight system can greatly enhance squad-level soldier lethality, a core capability of the Army,” said Joe Anderson, President and CEO of Rafael Systems Global Sustainment.

Rafael is one of Israel’s three major defense companies and the traditional research and development pioneer for Israeli military technology. It has supplied two Iron Dome air defense batteries to the U.S. Army in the last year and also supplies the Trophy defense systems for U.S. Abrams tanks. Rafael’s missiles and new technologies increasingly incorporate artificial intelligence and better target recognition. Rafael sells Spike in Europe and is building Iron Dome with Raytheon in the United States. As such this new demonstration is another important development for the Israeli defense relationship with the U.S. military and for Rafael in particular.

Spike SR, which is part of the Spike family of anti-tank guided weapons, “provides a lightweight (10 kg), shoulder-fired munition, with an enhanced range of 2,000 meters, increasing lethality at the individual squad level. Spike SR’s features, including its ease of use, allow lower echelon infantry to rapidly qualify and sustain a high level of operation with minimal training,” says Rafael. AEWE looked at the weapon as a precision munition for infantry squads. It is portable and lightweight. It was also examined for close-combat formations “to dominate the operational environment and handle new threats in a near-peer conflict,” a Rafael statement notes.

The missiles hit their intended targets in daylight electro-optic modes and also using infrared. The missile had to seek out moving targets and fly through obscured battlefields where its field of view was obstructed. “During the assessment, soldiers received instruction on the operation of the weapon, including indoor and outdoor training. US Army evaluators provided positive feedback on the system’s lightweight, lethality, and ease of use compared to what is currently in use by the US Army,” Rafael notes.

The experiment was managed by the U.S. Army’s Maneuver Battle Lab and U.S. combat veterans from the 1st Battalion, and 29th Infantry Regiment. It was attended by senior U.S. Army officials, including from Army Futures Command, the Maneuver Center of Excellence. Rafael’s Anderson said that Spike SR can be combined with other technologies it has that are improving the digitization of ground forces. “These systems, combined with SPIKE SR, can provide tactical overmatch by enabling high maneuverability and lethality. The live-fire further demonstrated the effectiveness of SPIKE and provided a good opportunity for first-hand soldier feedback,” said Anderson.

The U.S. Army is also looking at dozens of other items for the future battlefield. These include anti-drone devices and new suppressors for machine guns. This illustrates how armies are seeking to fine-tune existing technology and also embrace new ways to do battle, such as with drones and exoskeletons. Future army units, perhaps with the Israeli Spike SR, may be resupplied by drones in the field if all these experiments move forward.