The U.S. Army Has Suspended Its New Combat Fitness Test Due To Coronavirus 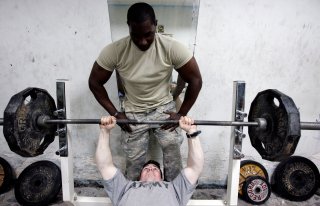 Fears of COVID-19 led to the suspension of the U.S. Army's transition to the new Army Combat Fitness Test (ACFT), a program that was developed to improve soldier and unit readiness, transform the army's fitness culture and reduce preventable injuries and attrition. The program was also aimed at enhancing mental toughness and stamina.

The implementation period for the program had begun in October 2018 and the goal was to have it become the Army physical test of record by this October. In January the Army began to distribute ACFT gear to more than one million active duty, Reserve and National Guard soldiers.

However, Army leaders made the decision last week to suspend the ACFT start date due to widespread gym closures to help prevent the spread of COVID-19. It remains unclear when soldiers will once again have access to the fitness equipment needed to prepare for the more challenging fitness test.

This would include training with weights and other gym equipment. Some soldiers had already complained that the new equipment rollout left little time to train to the new standards. Soldiers taking the ACFT would need hexagon bars and bumper plates for dead lifts as well as weighted sleds, medicine balls, kettlebells and measuring tape.

However, due to the coronavirus outbreak, the official start date has been officially "suspended until further notice." For now the existing three-event Army Physical Fitness Test (APFT) will remain the standard. The ACFT was intended to better measure the physical fitness attributes soldiers would need for combat. The six-event test required far more equipment than the older APFT. ACFT would include deadlifts, a standing power throw, pushups, the sprint-drag-carry, leg tuck and a two-mile run.

"In order for people to be in compliance with promotion boards and the fact that training is limited, they've extended the APFT," said Lt. Col. Robin Ochoa, U.S. Army spokesperson as reported by the Miltiary.com. "So if I took the APFT this past October ... then my scores are valid until further notice.”

The APFT was first introduced in 1980, and it includes two minutes of pushups, two minutes of sit-ups and a two-mile run. Military leaders have said that the test has failed to adequately predict which soldiers could accomplish specific physical tasks that may be necessary in wartime.

The older test did not require much equipment either. It required only repetition counters, a stopwatch and a running path.

The closure of the gym, along with delays in receiving the necessary equipment, has resulted in the suspension of the new program.

"We don't know what this virus is going to do ... we don't know what the impact is going to be on our ability to get those gyms back open," said Ochoa. "As things start to improve and we see things slowly become available, then we are going to have to figure out the timeline based off of how long service members have not had access to the gym and what's it going to look like for them to retrain and get back to previous fitness levels."