Is the US Army really ready to Stop Russia in a War? 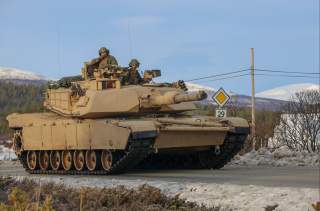 The force structure cycle has proved a vicious one to break in the last century: the United States Army organizes to fight a specific type of enemy, experiences a victory (pyrrhic or otherwise), and reorganizes once again for the next threat – only to find that the first one never disappeared. Russia is merely the latest iteration of this cycle. After the collapse of the Soviet Union in 1991, the United States embarked on a decade of conventional force reductions, followed by a decade of focus on counterinsurgency warfare, before discovering once again the need for a credible land force in Europe. Only seven years removed from the deactivation of two brigades in Europe, the Army will once again enter this cycle as force levels on the continent are increasing. As the Army seeks to rebuild the capability to overmatch a conventional foe, it is worth questioning what the objectives of this course of action vis-á-vis Russia are. Is a larger force in Europe intended to defeat a Russian advance or merely delay it? Is it a deterrent or a political tool? Better defining these objectives will ultimately better serve force planning considerations, but to do so requires taking a clear-sighted view of the Army’s post-World War II history in Europe. The utility of the Army in Europe has historically resided in the realm of politics and deterrence rather than a force capable of stopping a Russian advance. Rather than adopting a “bean counting” approach to the Army’s rebuild in Europe, history suggests that more nuanced and less costly options are available to achieve American objectives in Europe.

Post-WWII and the New Look

Victory in 1945 came at a heavy toll for all combatants, but no nation bore more of the cost than the Soviet Union, which suffered an estimated 27 million casualties. For those who viewed the erstwhile but seemingly depleted ally as the next great threat, the temptation to “strangle Bolshevism in its cradle” as Winston Churchill phrased it after World War I proved strong.  General George Patton advocated just this, remarking that “the Third Army alone and with damned few casualties, could lick what is left of the Russians in six weeks.” However, the “cradle” had grown considerably larger. Despite their enormous casualties, the Soviet Union still possessed an estimated 11 million soldiers under arms in 1945, roughly the same size as the entirety of the United States military. Numerical parity aside, the concentration of Soviet troops in Europe, the willingness to sustain unfathomable levels of bloodshed, and an ability to rapidly conscript replacements translated to an advantage in real terms. While no major military confrontations in Europe ensued, many believed this offered only a temporary respite. American soldiers remained stationed in Europe in large numbers as a policy of deterrence took shape, but serious doubts remained about the ability of these troops to triumph in a large-scale ground war. After 1945, the numerical gap between the Americans and Soviets only widened, as the latter prepositioned both troops and equipment for a European ground war. Notwithstanding this increasingly grim outlook, American troops remained on European soil in large numbers.

Upon assuming the Presidency in 1953, Dwight Eisenhower quickly recognized that military reality and larger strategy did not match. Informed both by his experiences as Supreme Allied Commander and as a career infantryman, Eisenhower critiqued the United States’ European strategy from both a logical and moral standpoint. If the Army could not hope to beat-back a ground invasion from the Soviet Union, what difference did the number of troops stationed in Europe make? Furthermore, why sacrifice the life of ground troops in a war they could not win? Eisenhower’s grand strategy, known as the “New Look,” addressed both problems. In addition to utilizing non-military means of action such as covert operatives, economic pressure, and informational warfare, the New Look relied upon the doctrine of Massive Retaliation, the notion that any conventional attack by Soviet troops on Western Europe would automatically incur an overwhelming nuclear response from the United States. Essentially, Eisenhower gambled that ground forces aside, the prospect of nuclear annihilation constituted enough to deter the Soviet Union from mounting any major attacks.

With any conventional war in Europe guaranteed to turn nuclear, no incentive existed for the Soviets to go on the military offensive. Furthermore, the New Look allowed United Stated military policy to reflect this new reality. Questionable monetary investments into a large ground force that appeared destined for defeat were reduced in favor of investments into the nuclear and aerial domains, far more cost-effective ways to achieve military deterrence. While these policies certainly did nothing to benefit the morale of the Army, they did allow for a strategic paradigm in which ground troops no longer served as a speed-bump on the road to Western Europe (a conflict that would have likely turned nuclear anyway). In the words of historian Adrian Lewis, the Army in Europe under Eisenhower represented “an ostentatious line telling the enemy not to cross.” Guided by his belief that “the most terrible job in warfare is to be a second lieutenant leading a platoon when you are on the battlefield,” Eisenhower implement a clear-sighted and realistic strategy that responsibly protected Western Europe without indulging in bloody fantasies of a non-nuclear clash of conventional armies. The prospect of even greater slaughter forbade that scenario. If the New Look was indeed a gamble, it worked.

In later years Eisenhower increasingly questioned the efficacy of keeping large numbers of soldiers in Europe. If ground troops served as a trip-wire rather than a roadblock, then the presence of only "one American division in Europe can ‘show the flag' as definitely as can several." In regards to maintaining a capable ground force in Europe for a non-nuclear contingency, he viewed the solution as belonging to European nations themselves. Anticipating the language that President Donald Trump would use half a century later, Eisenhower argued that “the United States has the right and the duty of insisting that her NATO partners assume more of the burden of defending Western Europe.” If not, the United States risked discouraging “the development of the necessary military strength the Western European countries should provide for themselves.” Thus, the Eisenhower strategy for combating Russia in Europe, though high risk, involved leveraging allies and technology to preserve American lives and resources. This realist strategy did not rely upon the necessity of physically stopping a Soviet advance.

This paradigm mostly held through the next two decades. Despite the criticism that the New Look invited under the Kennedy administration, the “limited war” theorists of the time applied their policies of gradual escalation to the periphery of Europe (with disastrous results in Vietnam) rather than on the continent itself. There, the military situation remained largely stagnant, as the Soviet Union possessed a 10:1 advantage in active divisions stationed on the front. This imbalance did not change until the late 1970s when the United States began deliberately leveraging its economic and technological superiority to offset the Soviet's numerical advantage. The invention of the transistor in 1947 had opened up a world of possibilities for military technology, and by the late 1970s, this technology had reached a usable stage of maturation in the form of Precision Guided Munitions (PGM). Coupled with the Army’s renewed focus on developing better combined arms doctrine in the aftermath of Vietnam, this arguably represented the first real opportunity to beat the Soviets in a ground war.

PGMs first saw use in Vietnam, when laser-guided weapons demonstrated their ability to hit specifically selected targets, saving time, resources, and minimizing collateral damage. The possibilities these weapons presented coincided with a concerted effort by Army leadership to develop a new doctrine for warfare in Europe. Under the umbrella of the Assault Breaker program, the Army sought to utilize PGMs to disrupt Soviet strategy directly. Relying on superior numbers, Soviet doctrine called for attacking a single point of penetration on the NATO front line, then deploying multiple waves of armored echelons until one broke through and exploited the breach. This formidable strategy met its match with 1982’s AirLand Battle, the doctrinal result of the Assault Breaker program. Recognizing that “parity in numbers of weapons and forces,” was impossible against the Soviet Union, the new doctrine instead emphasized building upon the qualitative edge that the United States enjoyed. AirLand Battle called for a vigorous and active ground defense at the potential point of penetration, while PGMs targeted the Soviet waves before their arrival at the front. If Soviet waves could be destroyed by PGMs while still in the “rear,” then their primary strategy for a successful attack would likely collapse. Developments in technology combined with new doctrine allowed the Army, for arguably the first time in history, to stand a credible chance of beating the Soviets in a European ground war without resorting to the use of nuclear weapons. More importantly, AirLand Battle specifically targeted the Soviet strategy of choice, rather than electing to directly compete in a domain in which the enemy possessed an absolute advantage.