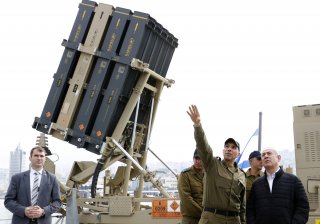 In what has the back and forth of a 1980s “will they or won’t they” comedy, the U.S. Army has now announced it will conduct testing of two Iron Dome batteries on American soil. This is after reports circulated earlier this year that the Army had reservations about using the Israeli-built platform.

The Army had announced plans to purchase the Iron Dome in February 2019 to comply with the fiscal 2019 National Defense Authorization Act, which required the service to equip ground forces with a pair of the batteries by 2020, Military.com reported. But how well the system can be integrated with the Army’s other platforms has been at issue, and some lawmakers have suggested that buying the Israeli-made system is just a short-term fix while the U.S. military develops its own program.

On March 4, Army officials even testified before Congress to express those concerns, and then canceled plans to purchase two additional batteries. The Army has said that the Iron Dome can’t be incorporated into its new Integrated Air and Missile Defense Battle command System (IBCS). However, the U.S. Marine Corps continued its interest in integrating the missile component of Iron Dome into its own air-defense systems.

Despite those previous concerns the Army announced last week that it will begin phased testing of the system, with the missiles, launchers and radar to be deployed to the White Sands Missile Range in New Mexico to undergo an equipment fielding and training program. The batteries are now scheduled to arrive in December 2020 and February 2021.

The rigorous testing will end will with live-fire engagement to shoot down a surrogate cruise missile target. After that is conducted the Iron Dome batteries will officially stand up at Fort Bliss, Texas, and then be available for operational deployment by September 2021 and December 2021 respectively the Army announced in a press release.

One factor in the about-face was that the Marines have demonstrated the possible interoperability of the system—even if interoperability isn’t entirely the same as fully integrated. It was noted that the Marines provided their sensor data to fire the Iron Dome but this only provided fire direction and not the fire control that is required on a multi-domain battlefield.

“What the Marines demonstrated was an interoperable solution, where they took a subset of an Iron Dome weapon system using their radar, launchers, those type of things,” said Brig. Gen. Brian Gibson, Air and Missile Defense Cross-Functional Team director via the press release. “So, even though Iron Dome took direction from an outside mission command system, “the weapon system still made the ultimate decision on what to do.”

While other older weapons were also designed without such joint capabilities, technology and warfare have advanced and so, too, has the need to develop solutions to provide commanders the flexibility and overmatch they may require and this has given rise to integration as the central principle of weapon system development.

Israel’s Rafael Advanced Defense Systems has also been showcasing a mobile Iron Dome platform, the I-Dome, which can protect against mortars, rockets and artillery. The truck-mounted system has carried out more than two thousand interceptions in Israel with a 90 percent success rate.