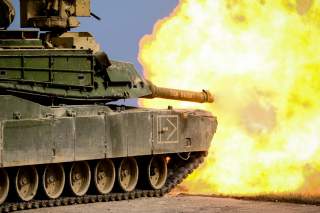 Fighter pilots can have head-up displays that projects their instrument readings on to the canopy, so they can keep their eyes on the enemy of instead the instrument panel.

Why can’t tank drivers have the same thing?

So, the U.S. Army wants a head-up display, or HUD, for vehicles.

In particular, the Army wants data from infrared sensors projected onto the windshield.

But there’s a problem, and it’s more with the display than the sensors. “The challenge resides in finding an affordable display solution capable of displaying HD (High-Definition) video of the current sensors, given the space constraints of each vehicle platform,” says the Army’s research solicitation. “There is currently a large capability gap for HD display technology that needs to be addressed so the Soldier can maintain technological superiority over their adversaries.”

The Army’s Night Vision and Electronic Sensors Directorate wants real-time data from short-, medium- and long-wave infrared sensors, as well as cues from systems like Blue Force Tracker, displayed to vehicle drivers. While HUD is a solution, it’s not the only one. “These video and cues should be presented either onto the driver's windshield when available (ex. HMMWV), a flip down visor or similar inside a military tank that enables the user to directly view current driving conditions through windshield or vision blocks while simultaneously benefiting from fused LWIR [Long-Wave Infrared] imagery and AR [augmented reality] cues.”

One issue with systems like HUD is the danger that the user could be distracted. Thus the Army wants “mission-critical and vehicle information to be displayed real time in a heads-up manner without causing distraction or requiring the user to look away from the road such as; location and destination information, speed, waypoint indication, mission status, etc. “

Possible solutions include “a projection type output directly into the glass and refracting it across the display, a holographic technology option, a mirrored small screen magnification into a heads up format, or other solutions that meet the requirement of this request,” according to the Army, as long as “the displayed information does not inhibit or slow down the Soldier’s reactions and decisions.”

The Army includes a stiff set of additional requirements. “The proposed display must also keep the Soldier hidden and therefore must not be seen beyond ten meters outside. It must have a night/day capability with a brightness adjusting option. It must be able to intake gig-e, CL, HDMI, and other current forms of imaging. The desired product must be capable of becoming fully integrated into military vehicles (HMMWV, Bradley, Abrams, Stryker, MRAP, etc.) while observing their specific space and operational requirements.”

The vehicle display project comes as the U.S. Army grapples with how to replace its Cold War tanks and armored vehicles with twenty-first-century designs. Future vehicles may look very different than the Abrams and Bradley, quite possibility smaller, lighter and designed around automation, robotic AI, and the massive amounts of sensor and network data that have become a feature of the modern battlefield. So, it’s not surprising that vehicle display technology must be designed with future vehicles in mind.