The U.S. Army Is Trying to Replace the Bradley Fighting Vehicle — Again 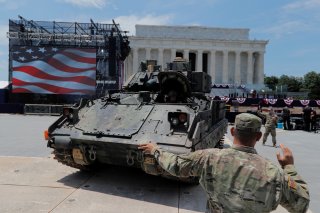 The U.S. Army has released a proposal request for its optionally manned fighting vehicle (OMFV) program. The OMFV would replace the Army’s aging Bradley Fighting Vehicle, which has been in service since the early 1980s.

The advent of the Soviet BMP infantry fighting vehicle in the mid- to late-1960s prompted the Bradley design. The Bradley was intended to be able to ferry troops around high-intensity European battlefield environments against the Soviet Union. IFVs would have to contend with nuclear, biological, or chemical threats and stay in the fight. The Bradley infantry fighting vehicle (IFV) would also have to be survivable against more conventional threats like anti-tank weapons and high-caliber guns, all while keeping pace and formation with larger main battle tanks.

The Bradley proved itself in combat during the Gulf War, where some people claim that Bradleys destroyed or disabled more enemy armor than the United States’ Abraham main battle tank. In conventional conflicts against enemy armor, the Bradley excelled, though it proved to be rather vulnerable to larger improvised explosive devices.

Attempts at replacing the Bradley have been numerous—and unsuccessful. The early 2000s Future Combat Systems Manned Ground Vehicles program aimed to address the Bradley’s high curb weight and low firepower when compared to main battle tanks. The program was canceled in 2009 in favor of the Ground Combat Vehicle (GCV) program.

The GCV program also sought to improve the Bradley’s firepower but also to provide crews with an improved networking capability. Crews would more easily be able to communicate with troops on the ground for improved situational awareness and decentralized command for more flexible decision making. Though the objectives were lofty, the program was canceled in 2014.

Despite previous false-starts and unsuccessful attempts, the Army is at it once again, though if this Bradley replacement program will be any more successful than the preceding programs remains to be seen.

According to a recently released draft proposal, the Army will select up to five preliminary design contracts, summer of next year for their Optionally Manned Fighting Vehicle (OMFV) program.

In an Army press release, Brig. Gen. Ross Coffman, director of the Next Generation Combat Vehicles program, said that "Accurately defining the desired set of capabilities without over-constraining the design is critically important,” though the Army’s draft proposal seems to put a lot of faith in what the defense industry comes up with, despite the previous program failures. Their draft proposal states, “to permit industry design freedom and promote innovation, the Army has avoided quantifying or prescribing critical levels of performance wherever possible.” Allowing defense firms to quantify performance is no silver bullet to finding a successful Bradley replacement.

Still, it’s not the first time around for the OMFV program. Last year, the OMFV program resulted in just one bid from a single company, General Dynamics. Bids from Rheinmetall and Raytheon were disqualified for unknown reasons. Criticisms of the program focused on the nearly one hundred mandatory program requirements and the short timeframe with which to deliver a from-scratch operational prototype—perhaps the reason why the Army is leaving capability definitions up to program participants.

We’ll see where the OMFV program goes—watch this topic closely for more information.