The U.S. Army Wanted This Weird Jump Jet (Until the Air Force Stopped Them) 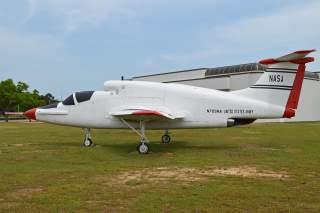 When one thinks of the U.S. Army, one generally doesn’t think of squadrons of jets flying around the battlefield. But at the height of the Cold War, the ground combat branch had its sights set on buying a fleet of jump jets.

Though the Pentagon turned the U.S. Air Force into a separate service shortly after World War II, its ground-pounding cousins remained interested in helicopters and other flying machines. A decade later, Army aviators were hard at work with aircraft makers to cook up special craft that could land and take off like helicopters, but fly like normal planes.

“While the 1947 National Security Act created an independent United States Air Force, this did not halt the expansion of Army organic aviation, or the Army’s increasing use of the helicopter,” Dr. Ian Horwood wrote in Interservice Rivalry and Airpower in the Vietnam War. “[But] in the early 1950s, such ‘convertiplanes’ appeared to offer more potential for Army surveillance and air mobility tasks than helicopters.”

In the end, the Air Force scuttled the plans — and buried decades of work.

By 1950, the idea of combining features from helicopters and traditional aircraft was hardly new. Spanish engineer Juan de la Cierva invented the autogyro, which blends a free-spinning rotor and a conventional forward- or rear-mounted engine, nearly three decades earlier.

On both sides of the Iron Curtain, military commanders realized that nuclear war would only speed up the destruction of normal airstrips. By the time Berlin fell, Hilter’s weaponeers had already started work on various alternatives, such as rocket planes that could shoot straight up into the sky from a small launch rail right into enemy bomber formations.

For the Army, a covertiplane would allow aviators to keep the aircraft close to the front lines and the soldiers they would undoubtedly be supporting on the ground. Troops would not have to capture enemy airfields keep the jump jets nearby.

But the fledgling Air Force saw the sky as their domain. The flying branch repeatedly opposed the ground combat branch’s research.

In 1949, both services agreed to the Bradley-Vandenberg Agreement, which limited the weight of any Army planes to less than 2,500 pounds without any fuel, ammunition or weapons under the wings. The flying branch hoped this would kill the ground combat branch’s aspirations.

Instead, Army leaders claimed that their hybrid aircraft did not fall into this category. The Air Force was apoplectic.

After three years of complaints and negotiations, the Pentagon imposed a new deal that doubled the minimum weight for Army planes. This time, the ground combat branch succeeded in getting a formal exemption for convertiplanes.

While the bickering continued, the Army never stopped its work on various flying machines, helicopters and jump jets. By 1966, the ground combat branch was testing more than 30 different kinds of crafts from futuristic jetpacks to “flying jeeps,” according to a contemporary fact sheet.

The litany of projects also included two types of convertiplanes. While plane makers Lockheed and Ryan Dubbed their unarmed prototypes “research planes” to try and fend off any Air Force objections, the Army saw the aircraft as integral to their future battle plans.

Externally, Lockheed’s XV-4 Hummingbird looked very much like a small jet fighter bomber. The plane could take off vertically by venting the engine exhaust through nozzles in the underside of the aircraft. To help produce more power in vertical flight, the top of the fuselage would open up so the engines could pull in additional air.

In contrast, Ryan’s XV-5 Vertifan had two traditional engines to power the plane like any other jet aircraft. But when hovering, a valve would open and force exhaust to drive three, powerful lift fans.

At 4,995 pounds, the original XV-4 was just under the Pentagon-imposed restrictions for conventional Army planes. The XV-5 weighed nearly twice as much.

Both aircraft were much faster than Army choppers. The Hummingbird could get to a top speed of over 500 miles per hour. The Vertifan topped out at nearly 550 miles per hour.

Unfortunately, neither design proved to be particularly functional — or safe. On June 10, 1964, Lockheed’s first prototype crashed, killing the pilot. Less than a year later, test pilot Lou Everett died when the initial Ryan model went down as the Army showed the plane off to the public.

In both cases, the complicated engine arrangements proved to be under-powered and unstable. In 1965, Army weapon testers recommended Ryan make five “mandatory” fixes and suggested another 11 more “desirable” changes, a preliminary reviewstated.

The evaluators complained about overheating in the XV-5’s cockpit, engine and fan ducts, sensitivity to gusts of wind while hovering and other problems. Lockheed and Ryan both rebuilt their prototypes to try and solve the issues.

In addition, Ryan proposed turning their type into a rescue plane. With a hatch in the bottom of the fuselage and a hoist, crews could reel in wounded troops like a helicopter, but race much faster to the nearest battlefield hospital.

The problems continued in dramatic fashion. During a mock rescue mission in 1966, the lift fans on the XV-5 sucked up the dummy injured soldier. With the mannequin in the motor, test pilot Bob Tittle lost control and died in the resulting crash. Ryan managed to repair the damage so tests could continue.

Three years later, the remaining XV-4 smashed into the ground in yet another incident. Harlan Quamme safely ejected, becoming the only test pilot to survive an accident in one of the jump jets.

By that point, the Army was losing its battle for its own jets. The Pentagon and lawmakers repeatedly sided with the Air Force. The ground combat branch had lost the right to arm its scout planes and its CV-2 propeller engine cargo planes.

In the early 1960s, the service had tried and failed to get its hands on two British Hawker Siddeley P.1127 prototypes. Between 1964 and 1965, the service had managed to squeeze into itself into a test partnership of these planes along with Germany and the United Kingdom.

But after the evaluation ended, the Air Force took over the experimental XV-6s — and promptly got rid of them. The Germans ultimately dropped out of the program. However, with continued interest from the U.S. Navy and the British military, Hawker Siddeley pushed ahead, leading to the iconic Harrier jump jet.

In 1971, the U.S. Marine Corps put the refined AV-8 Harrier into service. The same year, the Army’s jump jet dreams finally came to an end.

Today, the surviving XV-5 now sits outside at the U.S. Army Aviation Museum at Fort Rucker in Alabama.