The U.S. Army Wants Its Very Own Long-Range Missiles to Fight China 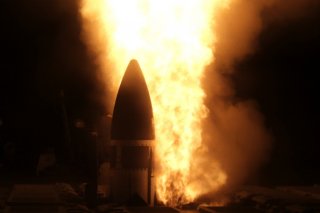 The U.S. Army has become increasingly keen on developing ways to blow up stuff from very far away—by far, think of hundreds of miles. Two big factors explain that change.

One is the Trump administration’s withdrawal from Intermediate-range Nuclear Forces (INF) treaty, which banned the U.S. and Russia from deploying land-based missiles with ranges between 310 and 3,420 miles.

The Army also is looking for ways to remain relevant in a potential conflict with China playing out across the vastness of the Pacific Ocean. That means it wants long-range missiles it could deposit onto Pacific islands to execute long-distance strikes.

The Army has moved forward with the development of a variety of new weapon systems in its Long-Range Precision Fire program, as you can read more about in this earlier article. That includes a 310-mile range Precision Strike Missile that can be fired from a standard M270 rocket launching truck, and a more exotic hypersonic weapon with a range recently revealed to amount to 1,725 miles.

However, studies found the Army lacked weapons suitable for targets 310 to 1,100 miles away. It didn’t make economic sense to use the expensive hypersonic missiles to strike targets that remained well under their range.

As a result, in July 2020 the Army issued a new requirement for Mid-Range Capability (MRC) missiles—and in November 2020 announced it had chosen the SM-6 and Tomahawk missile for the job, two weapons usually mounted in the vertical launch systems of U.S. Navy destroyers and cruisers.

The Army awarded $339 million to Lockheed-Martin to develop systems to integrate the naval weapons into a land-based platform. Reportedly, these will be the exact same missiles as the Navy’s, meaning it won’t have to invest millions of dollars in developing a specialized ground-launch model. The new launchers are expected to enter service by 2023.

It remains unclear whether the new weapons will be made compatible with the Army’s M142 or M270 multiple-rocket launcher systems, or if they will be mounted on a different dedicated vehicle chassis.

However, it’s understood the Army plans to deploy one Mid-Range Capability battery in each of its five planned Multi-Domain Taskforces, serving alongside one battery of the longer-ranger hypersonic missiles (LRHWs) in a Strategic Fires Battalion. Two MTFs will be deployed in the Pacific, one each in Europe and the Arctic, and a fifth will be held in reserve for a global response.

Tomahawk versus the SM-6

The Tomahawk land-attack cruise missile (or TLAM) is a no-nonsense solution to the Army’s needs. It’s also a familiar one, as during the 1980s the Army briefly deployed nuclear-armed BGM-109G Tomahawks on trucks with four-shot launchers as part of the Cold War standoff which led to the INF treaty.

The U.S. Navy has launched 2,300 Tomahawks into combat in the last three decades, which today cost about $1.4 million each. The turbojet-powered missile has a range exceeding 1,000 miles, a powerful thousand-pound warhead, can be re-routed, and send back camera footage midflight.

That could give the Army missile units impressively far-reaching anti-ship capability, though mitigated by the Tomahawk’s speed of 550 miles per hour (the cruising speed of an airliner). That means it could take up to two hours for a Tomahawk to reach a target, and the weapon might prove vulnerable to a ship’s close defense guns and short-range missiles.

The SM-6 missile, however, is a more curious choice because it is at its origin a naval air defense missile, including some capability against ballistic missiles, which was adapted to have a secondary surface-attack capability against ships or land targets using GPS guidance. Furthermore, the SM-6’s range of 150 miles at first glance falls well short of what the Army is seeking for mid-range capability.

But the SM-6 has one the Tomahawk lacks: speed. Its two-stage solid-fuel rocket boosters can accelerate the missile to up to three and a half times the speed of sound, nearly five times faster than a Tomahawk. That velocity gives point defenses a very limited chance to shoot it down and imparts a kinetic impact effect that might compensate for the SM-6’s comparatively light 140-pound fragmentation warhead.

As for the range issue, the SM-6’s effective strike distance on surface targets likely considerably exceed its 150-mile anti-air range. Furthermore, the Navy plans to induct by 2024 an enlarged SM-6 Mark 1B model that will fly at hypersonic speeds (Mach 5 or higher) and have greater range.

That said, at $5 million each, a single SM-6 costs roughly as much as three Tomahawks. That means it would be reserved for hitting very time-sensitive targets (say a liquid-fuel ballistic missile being gassed up for launch) or very well-defended targets a Tomahawk might struggle to evade.

The SM-6 might also hypothetically give the Army a new air defense capability with greater reach than its 100-mile-range PAC-2 Patriot missiles. Of course, implementing that would require networking with air defense radars that wouldn’t be an organic part of an Army artillery unit.

In the long run, the Army is developing an Operational Fires hypersonic missile with a range of 1,000 miles and a next-generation throttleable rocket motor, in theory combining the range of the Tomahawk with the high speed of the SM-6. If it completes development, OpFires might supplement or replace the Army’s naval missiles in the long run.

It’s also believed the shorter-range Precision Strike Missile could have its range extended to qualify as a mid-range missile as well.

That said, not everyone shares the Army’s new enthusiasm for long-range missiles.

For the last three decades, long-range strike were almost exclusively the province of the Air Force and Navy. These services now feel the Army is intruding on their turf when they argue the land warfare branch should instead be ceding funding to the Navy.

A senior Air Force general said in a podcast in March 2021 “I just think it’s a stupid idea to go and invest that kind of money that recreates something that the service [US Air Force]  has mastered and that we’re doing already right now. Why in the world would you try that?”

Indeed, one issue is that U.S. ships and aircraft can already reach any target in the world, while the Army’s new missiles could only be deployed within range of relevant targets with the permission of governments in Asia and Europe. Such a willingness doesn’t exist yet, and might only manifest on the eve of a major crisis.

As for anti-ship capability, keep in mind the Army would have to deploy a maritime reconnaissance capability—or at least draw upon the Navy’s—to have any idea of the position of ships over a thousand miles away. In fact, the Army’s new Multi-Domain Battle concept is based heavily on networking with Navy and Air Force platforms—a concept the Navy has been reluctant to endorse. That said, the Army also plans to form Theater Fires Commands that would gather intelligence for long-range strikes.

The Army, however, insists that long-range capability would actually enhance the Air Force’s effectiveness by destroying air defenses and time-sensitive targets which would otherwise impose heavy risks to Air Force strike operations. Furthermore, the Army’s missile units could guarantee long-range strike capability in the early phase of a conflict, when Air Force squadrons would be preoccupied countering enemy air power and air defenses.

Regardless, the Army’s decision to rapidly adopt existing technology rather than developing an entirely new exquisite system at great risk and cost is arguably a positive development.