The U.S. Army's M1 Abrams and Robot Tanks (Fighting Side by Side?) 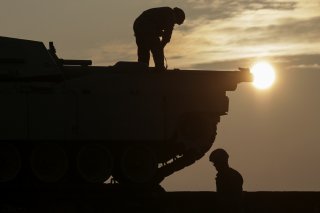 It is a question that lingers with no real answer—at least not an answer at the moment. Will there be a replacement for the Army’s upgraded Abrams main battle tank? Should there be? Ultimately an entirely new platform may arise, but many questions remain open, such as how long until that happens? Will there still need to be a vehicle built with heavy armor to withstand heavy enemy mechanized attacks? Perhaps a new Abrams-like platform, should it come to fruition, will be a large, heavy vehicle with Abrams-like armor protection. At the moment, there simply may not be anything that has a comparable protective performance that can replace it.

Is the answer lightweight armor composites? A new, impenetrable Active Protection System? Or, perhaps the optimal solution lies in the fast-emerging phenomenon of manned-unmanned teaming.

One simple way to engineer an ultra-lightweight, super-fast, yet heavily armed future combat vehicle is to simply make it a drone that is controlled or operated by a heavier manned vehicle such as an Abrams tank. An Abrams tank can adjust tactics and be used specifically for certain missions only it is able to perform successfully, all while drawing upon human decision-making faculties to drive operations, while informed by ultra-high-speed, AI-enabled computing and data processing.

“If we ever get to the point where we say . . . ‘this is autonomous,’ you can build a lightweight vehicle because you don’t have to provide the protection to the soldiers who are in it. We’re not there yet, but we are doing a lot of modeling and simulation to work through prototyping,” Gen. John Murray, Commander, Army Futures Command, told the National Interest earlier this year.

Much of this kind of experimentation is making rapid progress, yet Murray also emphasizes the significance of attributes unique to human cognition and decision-making which simply cannot be replicated by mathematically oriented algorithms, even ones enabled by artificial intelligence.

This recognized circumstance is part of why many senior Army weapons developers emphasize that an optimal solution may be to combine, integrate and call upon both autonomy and human cognitive capacities into a broader tactical picture. This means heavily protected manned vehicles may well be here to stay for years. This circumstance could carve out an operational niche for the upgraded Abrams tank to serve years longer than may have been anticipated, given that today’s Abrams tank is essentially an entirely new vehicle given the nature and extent of upgrades performed on the platform.

This approach may enable a particularly lethal and survivable solution, meaning that a deployable, lightweight yet highly lethal tank-like platform can “close with an enemy” while still benefiting from human command and control operating from a manned platform networked to the robotic attack vehicle. The precise balance of these variables, and deliberations regarding how to best execute them, forms the primary inspirational basis for the Army’s Optionally Manned Tank (OMT) program, which is now under consideration. The intention is to architect a future tank-like platform that, if needed, can function as a purely robotic platform.

“It will be manned or unmanned as required by the commander,” Maj. Gen. Ross Coffman, the director of the Next-Generation Combat Vehicles Cross-Functional Team for U.S. Army Futures Command.

A manned, heavy Abrams tank could both close with the enemy yet also rely upon human decisionmaking faculties to oversee operations of many unmanned systems at one time, something which can preserve the irreplaceable role of human cognition yet also leverage the promise of artificial intelligence-enabled robot drones and unmanned systems. This kind of thinking, allowing for space for both the Abrams tank and a new, lightweight Optionally Manned Tank to operate together, may ultimately offer the optimal solution. With the advent of advanced sensing, for example, an Abrams tank could operate as a command and control “anchor” in a relay or meshed system of networked air and ground drones. Perhaps this could reach beyond the horizon and enable an Abrams tank to maintain its lead role, even if smaller, lighter unmanned and more mobile platforms advance further forward over great distances.

The Army plans to make key determinations regarding a specific path forward by 2023 to at least advance the developmental trajectory and chart a course of sorts into future armored warfare. Some of the efforts with the Army’s ongoing Light, Medium and Heavy Robotic Combat Vehicle development are informing the process, as the “heavy” variant could conceivably evolve into a tank or tank-like platform. Murray explained that several more years of robotic vehicle development would be crucial and needed to make a properly informed decision about how to balance these variables in relation to fast-changing technological progress.

As part of the OMT developmental process, the Army is closely monitoring the threat environment with a specific mind to great-power rival nations.

“As we look at China and Russia, we look at their capabilities as a pacing threat,” Coffman said.