The U.S. Army's Next War Has Already Begun 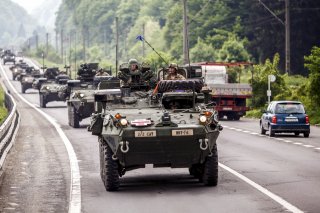 The U.S. Army’s most important focus should be to understand how it is most likely to be used and in which environments. Throughout its history, the Army has regularly engaged in small wars and will likely continue to do so. David Kilcullen offers a compelling argument that most conflicts will occur in highly-networked mega-cities located on the littorals, many of which will be “feral cities.” Intervention in these spaces may be undertaken for various reasons ranging from humanitarian aid to peacekeeping to counter-insurgency, and involve low-to-medium intensity conflict. The Army must therefore prepare for what former Marine Corps Commandant Gen. Charles C. Krulak described as the “Three Block War” scenario. Fighting in open terrain is a historical anomaly common only to the past several centuries; instead, siege warfare and wars in cities have been the norm, to which modern war may be returning. Before becoming Chairman of the Joint Chiefs of Staff, General Mark Milley predicted that the Army would likely have to fight in urban areas. As a result, it needed to change how it organized, trained, and equipped itself as it was not postured for this mission.

The Army may have to assume a significant role in the constabulary and expeditionary operations in the future, given Marine Corps Commandant General David Berger’s efforts to reorient the Marines through Force Design 2030 to primarily focus on countering China. A host of former senior officers have criticized this approach, arguing at a minimum that some of the divestment of equipment and change of force structure is fundamentally altering the ability of the Corps to serve as the standing force in readiness. If the Army becomes more expeditionary, it must be prepared for adversaries who have learned the importance of fighting U.S. forces asymmetrically. The Army must also prepare to encounter non-state actors with such massive wealth, resources, and ruthlessness to overmatch the capabilities of nation-states. For example, Mexican Drug Trafficking Organizations have often overwhelmed federal troops in street battles.

As the war in Ukraine and the 2020 Nagorno-Karabakh war demonstrate, in modern war, anything that can be sensed can be killed (the Azeri-Armenian conflict also demonstrated the continued salience of urban warfare). Syrian resistance forces and ISIS fighters found low-tech solutions to counter ISR and snipers, such as hanging plastic sheeting over alleyways. Similarly, modern militaries such as Israel and Russia, are researching ways to reduce soldiers’ and vehicles’ signatures. The Israelis have focused on blocking an individual’s thermal presence. The Russians are developing “Chameleon” camouflage - an electro-chromatic “glass” that varies color and transparency for vehicles. British defense contractor BAE is working on an infrared “invisibility cloak” to disguise vehicles and blend them into their surroundings. Other researchers are creating even more exotic “cloaking devices” (some manufactured via metamaterials manufactured via nanotechnology) to hide objects as large as buildings in visible light.

Russia’s logistical failures in Ukraine demonstrate the importance of shortened (and multi-modal) supply lines. A critical vulnerability exposed by the conflict is fossil-fuel dependence. Hydrogen vehicles are one way to address this weakness in Army logistics and also contribute to crew survivability through a reduced signature. In collaboration with General Motors, the Army designed a testbed known as the ZH2, a modified Chevy Colorado. The vehicle is stealthier than traditional trucks because it has a smaller thermal footprint, and its engine does not produce noise, smoke, or odor. Many people wrongly associate hydrogen with the Hindenburg explosion. In reality, hydrogen cars are safer than gasoline-powered automobiles, because modern hydrogen tanks do not explode. Hydrogen gas does not pool like liquid benzene and ignite. Instead, it dissipates into the air.

While controversial, the Army should nevertheless research biohacking. As demonstrated by the widespread doping programs of premier teams in the Tour de France (as recently as the 2021 tour), the state-run doping of Russian Olympic athletes and the “steroid era” of Major League Baseball performance-enhancing drugs frequently offer a competitive edge, allowing users to train longer, recover faster, and excel physically. China is pursuing a program to gain military advantage by increasing human performance, seeking to meld brain science, AI, and biotechnology (as an example, they are experimenting with the drug Modafinil for increased mental acuity). The People’s Liberation Army recognizes biology “as a new domain of warfare.” Commercial technology already allows for constant monitoring of an individual’s physiology. Implantable pumps for dispensing medicine are thirty-year-old technology. Developing systems that will monitor soldiers, micro-dose them with hormones to improve performance, and even administer medication if they suffer a wound, traumatic brain injury, shock, or other injury is within the realm of the possible.

The Army should focus on improving doctrine and training for urban warfare in feral mega-cities. It must develop counters to the proliferation of counter-platform weapon systems that provide an asymmetric advantage to defending forces. Minimizing the signature of individual soldiers and vehicles, improving their survivability, and reducing the logistics tail represent methods to maintain a critical edge in this new environment. Finally, enhancing soldiers’ performance and even treating injuries through biotechnology is an area that should be investigated. Investing in these critical technologies will improve the Army’s capabilities across the entire spectrum of conflict.

Christopher D. Booth is a national security professional; served on activity duty as a US Army armor and cavalry officer; and was a fellow in the General Robert H. Barrow Fellowship for Strategic Competition and the Brute Krulak Center for Innovation & Creativity. He is a distinguished graduate of Command and Staff College–Marine Corps University, and graduated from Vanderbilt University Law School and the College of William and Mary.