The U.S.-China Relationship Is Too Big ($733 Billion) to Fail 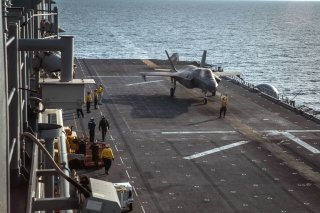 Not since the Chinese Communist Party’s crackdown on the Tiananmen Square protests thirty-one years ago have U.S.-China relations been defined by so much antagonism and mistrust.  Across multiple domains, from technology and trade to development aid and geopolitics, Washington and Beijing are not only seeking advantage—they are actively trying to undermine one another’s progress.

The global spread of COVID-19 and China’s neglect to disclose the potency of the disease has hastened the deterioration of relations between Beijing and Washington. China hawks in Washington have newfound momentum to press their case for a more aggressive U.S. posture towards the Asian power.

But while a certain amount of accountability is warranted, any punitive action towards the Chinese must be well thought through. At a time when U.S.-China relations risk becoming totally adversarial, Washington needs to ensure the quest for accountability does not completely upend a bilateral relationship that will define the course of the twenty-first century. A sporadic decoupling, which would lead to an unpredictable Cold War situation between the world's two largest economies, is out of the question.

It’s no secret that the U.S.-China relationship is suffering from a number of problems, some of which are specific to the nature of the current international system. Just as hardliners in both Washington and Moscow had an immeasurable impact on policy during the early Cold War period, China hawks in the Beltway are watching their influence steadily rise. While China’s predatory trade practices, currency manipulation, and human rights abuses have long been complaints in U.S. policy discussions, the coronavirus crisis is strengthening a theme in Washington that nothing short of outright confrontation will prevent Beijing from attaining hegemonic status.

Washington and Beijing risk being trapped in a self-fulfilling prophecy. The more decoupling drifts into the mainstream, the more likely U.S.-China relations will be categorized by needless and provocative zero-sum competition. And yet the more U.S. and Chinese leaders view one another as mortal enemies, the more power hawks in Washington and Beijing will possess to destroy the relationship altogether.

Both nations are to blame for this sorry state of affairs. The list of grievances between Washington and Beijing is long. China, for instance, recently expelled some of the most respected U.S. news organizations from the country in response to Washington's restrictions on Chinese media outlets operating from American soil. Beijing is strongly decrying the Trump administration’s lobbying effort against Chinese telecommunications giant Huawei, which the U.S. considers a global security threat.

The U.S. State Department repeatedly condemns China for intimidating behavior in the South China Sea. The Chinese Foreign Ministry, in turn, vocally criticized freedom-of-navigation exercises by the U.S. Navy. The U.S. Pacific Command’s request for an additional $20 billion over a 6-year period, funds that would pay for the construction of forward-deployed bases in the Asia-Pacific, will evoke stern countermeasures from the People’s Liberation Army and could very well reinforce the very Chinese strategic weapons buildup the White House wants to curtail. President Trump’s signing of a bill last November that sanctions Chinese officials responsible for repression in Hong Kong resulted in an extreme demarcate from Beijing as a deliberate violation of its sovereignty.

The mutual hostility is also bleeding into how ordinary Americans and Chinese perceive one another. According to a March survey from the Eurasia Group Foundation, approximately 39 percent of Chinese have a very or somewhat favorable view of the United States—an 18-point decrease from the previous year. Similarly, the Pew Research Center reported that 60 percent of Americans held an unfavorable view of China, a 13-point increase from the preceding year.

Granted, U.S policy on China does need to undergo reform. Washington remains heavily dependent on China for pharmaceutical agents and antibiotics; U.S. imports of Chinese medical equipment have increased by 78 percent since 2010. 90 percent of U.S. antibiotics are sourced from Chinese companies, providing Beijing with leverage over the United States during a public health crisis. The United States would be well advised to bring some of that medical manufacturing home, in the process lessening China’s dominance over global supply chains. No nation, especially the United States, should be held hostage to a foreign power for life-saving medical supplies.

The U.S.-China relations, however, are too big to fail. Decoupling two countries that are heavily interdependent economically and whose trade relationship is valued at over $737 billion would cause extreme economic pain to both economies, eliminate a barrier to full-blown confrontation, and reduce the authority of pragmatists in both capitals who counsel restraint and a degree of accommodation.

But any reform in the U.S.-China relationship will need to take place gradually, with clear-eyes, a level-head, and sensationalism left at the door. In the interim, both countries will have to work together when they can and manage their differences responsibly where they must.