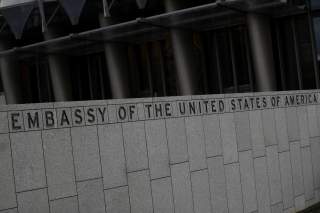 An American U.S. diplomat’s wife fled England after she killed a British teenager while driving on the wrong side of the wrote, authorities said Saturday.

Sacoolas claimed diplomatic immunity after the accident and she was allowed to avoid prosecution and leave England. Dunn’s family members and British authorities pleaded that she return to the country to stand trial.

“President [Donald] Trump, please listen,” Charlotte Charles, Dunn’s mother, said during an interview with Sky News. “We’re a family in ruin. We’re broken. We can’t grieve. Please, please, let her get back on a plane, come back to the U.K. … We could understand how she’s feeling, but more importantly, she needs to face justice, see what she’s done.”

This is heartbreaking and nobody can be above the law. If you are here in the U.K. then you must abide by our rules. This family deserve answers and respect shown to their son. #Justice4harry https://t.co/FyhzQMcdBR

Family members of diplomats are covered under the 1961 Vienna Convention on Diplomatic Relations. This means that they can avoid arrest for almost any crime in another country, although the home country is allowed to waive immunity, WaPo reported.

“We’re disgusted, appalled, how she could be having this cloak wrapped around her,” Tim Dunn, the teenager’s father, said according to Sky News. “I’m angry that someone could do this and then get on a plane and go. I can’t believe she’s living with herself.”

British Prime Minister Boris Johnson added Monday that he also hopes Sacoolas will go back to England and face the consequences, noting that he would be “raising it” with the White House” if the situation can’t be resolved. (RELATED: Boris Johnson Hung Up On President Trump)

The U.S. State Department extended its condolences to the Dunn’s family but added that “immunity is rarely waived” in a statement, CBS News reported.

“Questions regarding a waiver of immunity with regard to our diplomats and their family members overseas in a case like this receive intense attention at senior levels and are considered carefully given the global impact such decisions carry; immunity is rarely waived,” the State Department said.

The U.S. State Department did not immediately respond to the Daily Caller News Foundation’s request for comment.