U.S. Diplomats Will Return to Kyiv With a New Boss 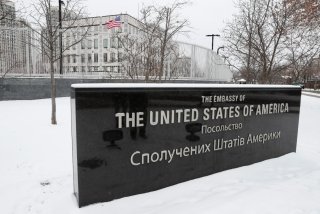 Over two months into Russia’s invasion, U.S. diplomats are starting to return to Ukraine.

Secretary of State Antony Blinken announced that the United States has decided to re-establish its diplomatic mission in Ukraine during a visit this week to the capital city of Kyiv. “We will have American diplomats back in Ukraine starting next week,” he told reporters. “They’ll then start the process of looking at how we actually reopen the embassy itself in Kyiv.” Blinken also informed top Ukrainian officials that President Biden would name Bridget Brink to serve as ambassador to Ukraine, filling a position that has been vacant since 2019, when former President Donald Trump removed ex-Ukraine ambassador Marie Yovanovitch.

State Department spokesperson Ned Price said on Tuesday that scores of U.S. diplomats have already made their way to the western city of Lviv. "The deputy chief of mission and members of the embassy team traveled to Lviv, Ukraine, today, where they were able to continue our close collaboration with key Ukrainian partners," Price said, adding, “today’s travel was a first step ahead of more regular travel in the immediate future, and as we’ve said, we’re accelerating preparations to resume Embassy Kyiv operations just as soon as possible.”

Blinken said earlier that he expects the Kyiv embassy to reopen within several weeks. "We are constantly assessing and evaluating and re-assessing the security situation with a view towards resuming those embassy operations as soon as possible, again, to facilitate our support to the government and people of Ukraine as they bravely defend their country,” Price added.

The development is the latest in a spate of Kyiv embassy reopenings announced by Western governments this month. Last week, British prime minister Boris Johnson said that London would resume operations in its Kyiv embassy in the coming days. The French embassy returned to Kyiv on April 15, though France, along with London and Washington, continues to advise its nationals against travel to Ukraine.

The embassy reopenings in Ukraine’s capital were facilitated in part by the full withdrawal of Russian forces from the Kyiv region in early April. Ukrainian president Volodymyr Zelenskyy has urged his counterparts to resume diplomatic operations in Kyiv as a show of support while the war continues to rage in the country’s eastern Donbas region.

There is no indication that the embassy in Kyiv will coordinate ongoing U.S. military aid to Ukraine. Instead, a new control center in Stuttgart, Germany, will lead those efforts. As per CNN, the center is intended to “streamline the delivery” of military assistance to Kyiv by both the United States and allied countries.