The U.S. Economy Is In Total Free Fall Thanks to the Coronavirus 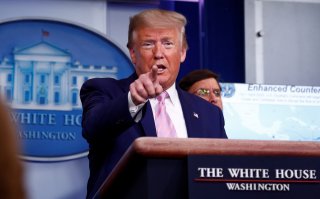 Unemployment numbers have been released for the second week since the economic crash in mid-March. In the past week, 6.6 million new workers have filed for unemployment benefits, doubling the already record-breaking numbers the previous week. This brings the total American unemployed to at least ten million, a 3000% increase from what it was at the beginning of March, a fallout of unprecedented speed.

“What usually takes months or quarters to happen in a recession is happening in a matter of weeks,” said the chief U.S. economist for Bank of America Merrill Lynch, Michelle Meyer.

This severe contraction in the job market, the worst in most Americans’ lifetime, is a direct consequence of the coronavirus pandemic. As the United States attempts to flatten the virus’s expansive curve, state governments and localities have instituted enforced social distancing policies that have required the closures of most businesses. Now that the Trump administration is recommending extending these recommendations until the end of April (if not longer), many companies have decided to close their doors for good rather than wait out the public health crisis.

First-time requests for unemployment had already grown to 3.3 million two weeks ago. Combined with this week’s numbers, March 22 to 28, the full picture is a minimum of 10 million, possibly not including people who are unemployed but do not qualify for benefits. This puts the unemployment rate at a rough 10%. During the Great Recession after the 2008 economic crash, unemployment only hit 10% for one month, October 2010.

"States continued to identify increases related to the services industries broadly, again led by accommodation and food services. However, state comments indicated a wider impact across industries,” said the U.S. Department of Labor. Retail workers have been particularly impacted.

On raw numbers, California has been the worst impacted in the latter half of March, adding 964,000 individuals to the dole. Being the largest state, its expected that its numbers would be disproportionately large. Its followed by Pennsylvania, which added 755,000 to the unemployment rolls, and Ohio, which added 454,000.

As a percentage, it’s smaller states whose economies have been disproportionately impacted. New Hampshire’s number of unemployed increased by 4,899%. It’s followed by North Carolina with a 4,238% increase, and Louisiana, with 4,207%.

In an attempt to give relief to these millions of unemployed, last week the federal government passed a $2.3 trillion stimulus, $250 billion of which will be in the form of direct checks to most Americans. Individuals who made $75,000 or less in 2019 or 2018 will be eligible for $1,200.

The Labor Department’s announcement, however, did not precipitate a further decline in the stock market. These numbers were expected by many market observers, who have accepted that the U.S. is entering a new depression.