U.S. F-35 Recovered From the Bottom of the South China Sea 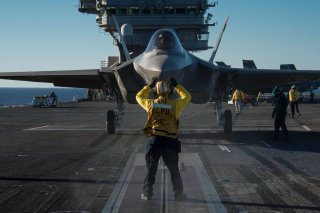 The U.S. Navy has recovered an F-35C Lightning II that crashed into the sea in January. According to a recent U.S. Navy press release, the Navy managed to salvage the stealth fighter from a depth of “approximately 12,400 feet.”

In order to retrieve the aircraft, the Navy’s Supervisor of Salvage and Diving relied on the diving support construction vessel Picasso.

“The task force’s expertise in rapid, scalable command, control, and communications, agile logistics, organic security, and explosive ordnance disposal was the most flexible choice for the fleet commander to respond in a timely manner,” CTF 75 Commodore, Capt. Gareth Healy explained in the U.S. Navy statement.

“Ultimately, this deliberate approach resulted in the correct capabilities conducting recovery operations within 37 days of the incident. Given the unique challenges of this problem and the unique technical capabilities that NAVSEA delivered, this was an aggressive and achievable timeline.”

The statement explained how exactly they salvaged the F-35, stating that “the aircraft was recovered using a CURV-21, a remotely operated vehicle (ROV), which attached specialized rigging and lift lines to the aircraft. The ship's crane lifting hook was then lowered to the seafloor and connected to the rigging, and then lifted the aircraft to the surface and hoisted it onboard Picasso.”

The Navy added that “the aircraft will be delivered to a nearby military installation to aid in the ongoing investigation and evaluated for potential transport to the United States.”

The stealth fighter crashed last month, prompting fears in the United States military that Russia or China could salvage the aircraft. If it was recovered by a rival power, the airplane, even in an unflyable state, could have been an intelligence bonanza.

Although both Russia and China have multiple stealth fighters in development or in service, experts believe their designs lag behind the United States’ F-35 design. The American F-35 fighter has likely aided China’s stealth fighter development, as the Chinese program is believed to have stolen F-35 project data to further their own indigenous design.

Although the crash in question did not result in fatalities, it was remarkable. A video of the incident, leaked to the internet by a crew member of the USS Carl Vinson, shows dramatic footage of the fighter approaching the aircraft carrier at too low an altitude.

The stealth fighter’s fuselage underbelly struck the edge of the aircraft carrier’s flight deck, sliding across the deck in a ball of fire and dropping off the side of the ship and into the sea.