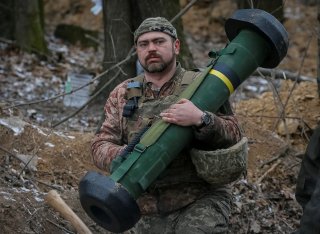 A “small number” of U.S. military forces are performing onsite inspections of weapons caches in Ukraine to ensure military aid to Kyiv is being properly accounted for, a senior U.S. defense official told journalists earlier this week.

The defense official said there have been “several” such inspections, but they did not specify how many U.S. personnel there are in Ukraine and where the inspections were performed. Similar inspections were carried out prior to the war, but they were suspended after the Russian invasion commenced on February 24.

It is unclear what prompted the decision to resume onsite inspections. There have been unverified reports alleging the misappropriation of Western aid, including purported black market transactions and even instances of Western-supplied arms being sold to Russian-affiliated actors by Ukrainian intermediaries. The Finnish police have raised alarm over the trafficking of Western-donated weapons from Ukraine by smuggling rings, according to the Moscow Times. These warnings were echoed earlier this year by Europol.

White House officials insist they have not seen evidence of U.S. military aid being used for illicit purposes, citing Ukraine’s “intense” need for these weapons to fend off the Russian invasion. “Thus far, intense internal demand for use on the battlefield by Ukrainian military and security forces within Ukraine is assessed to be impeding black-market proliferation of small arms and guided infantry weapons,” read a State Department document, according to NBC News.

When asked about the risks of direct engagement with Russian forces, Brig. Gen. Pat Ryder reaffirmed, without providing details, that the inspections are being conducted away from the front lines. “In terms of personnel that are conducting these inspections, my understanding is they would be ... well far away from any type of frontline actions,” he said. However, the Kremlin has repeatedly said it will treat all foreign weapons shipments on Ukrainian territory, whether on the front lines or not, as legitimate military targets. Russian forces have made good on those threats over the course of the war, launching strikes on foreign aid stockpiles as deep as the far-western Lviv region near Ukraine's border with Poland.

Lawmakers have pressed the Biden administration in recent months for greater oversight of the security assistance being sent to Ukraine in unprecedented volumes. It remains to be seen if voices within the GOP, which have led these calls, will pursue changes in Washington’s approach to security assistance for Kyiv if Republicans win the House and Senate in the upcoming midterm elections.