U.S. Influence in Africa Is Being Eclipsed by China, and It Matters 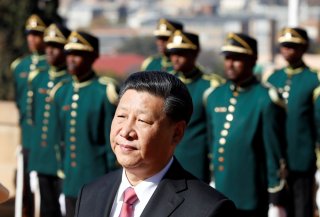 Twenty-two years ago, I landed in Washington eager to join a think tank just a few blocks from Capitol Hill to join a team of China analysts eagerly anticipating the U.S. pivot to Asia.

A Texan with little foreign policy experience had just secured the Republican nomination for president, promising to carve out a “humble” role for the world’s lone superpower in global affairs. A self-described “clear-eyed realist,” George W. Bush appealed to Americans yearning to see the United States exercise caution before becoming involved in faraway lands.

Intrastate, civil, and ethnic war had featured prominently in the 1990s with the political science discourse dominated by debates over the tradeoffs associated with the pursuit of national security interests versus humanitarian intervention. Increasingly weary of foreign entanglements during the Clinton years, Americans seemed inclined to refocus their attention on great power politics.

Most in Bush’s orbit expected that U.S. dominance would be challenged in the new century by authoritarian regimes, including resurgent or rising powers—a Russian Federation eager to relive its Soviet glory days, an Islamic Republic of Iran committed to exporting fundamentalism, or a hostile North Korea with nuclear ambitions.

But it was the People's Republic of China’s global ambitions that were expected to dictate the entire world’s attention.

When the Supreme Court finally declared Bush the winner of the contested 2000 election, the incoming administration spared no time in tapping foreign policy experts, including the best China hands it could find.

And then, on an otherwise unremarkable September morning in 2001, fewer than eight months after being sworn into office, the forty-third president was unexpectedly confronted with a new threat—the specter of transnational terrorism. The War on Terror would become the longest military engagement in American history.

Washington’s pivot to Asia was put on hold. But Beijing kept its eyes on the prize.

With U.S. authorities distracted by non-state actors and the projection of power in the Middle East, China seized the opportunity to flex its geopolitical muscle and accelerate the transition to a widely heralded “Chinese Century.”

Nowhere did it do so more successfully than on the African continent.

A newly released survey of 4,507 African youth across fifteen countries by the Ichikowitz Family Foundation concludes that China has now eclipsed the United States as the foreign power with the most significant positive influence on their lives (76 percent to 72 percent). The finding constitutes a marked decline from the 83 percent of young Africans that cited the United States as having a positive influence in the inaugural poll just two years ago.

Though faith in the African Union (measured at 82 percent) remained the strongest of any multilateral actor in terms of shaping the continent’s future, China’s efforts to surpass the United States and European Union—particularly in the areas of affordable products, foreign direct investment, and trade relations—suggest that Beijing’s battle for hearts and minds was a sensible strategy, and a resounding success.

The country’s influence on the continent is decades in the making.

According to the China Africa Research Initiative at Johns Hopkins University’s School of Advanced International Studies, China’s foreign direct investment in Africa increased from $75 million in 2003 to $2.7 billion in 2019—the very time frame when Western powers were preoccupied with global terrorism.

As Ivor Ichikowitz, chairman of the foundation responsible for the Africa Youth Survey, rightly observes: “In Africa, America has played a very, very limited role, its actually played an embarrassingly insignificant role in terms of actual investment, actual trade, actual building of infrastructure.” By contrast, “Beijing has plowed money into African infrastructure over the past two decades and supplies the continent with affordable consumer goods ranging from mobile phones and solar panels to shovels and plastics.”

China’s involvement in African affairs may be underscoring the positive role played by external actors.

Though foreign powers are seen as the second-most significant drivers of negative change, with more than one-quarter (28 percent) of respondents indicating that they negatively impact the lives of citizens, the survey finds “widespread agreement among African youth of the positive influence of foreign powers and expectation of foreign leaders to have a bigger impact on the African continent over the next five years.”

While just 30 percent of respondents call their current standard of living “good,” an eleven-point fall since 2019, 77 percent expect that condition to improve over the next two years and an astounding 78 percent are sufficiently optimistic to report efforts to start their own businesses in the next five years.

Nevertheless, concerns persist: 86 percent of respondents worry whether they will be able to garner well-paying employment, with 69 percent expressing dissatisfaction with their government’s job creation efforts. A disturbing three-fourths of respondents expressed anxieties related to political instability, with a whopping 53 percent reporting a high level of concern. 68 percent are worried about terrorism; in fact, 50 percent believe that terrorism has impacted their daily lives, and an alarming 15 percent indicate they have been contacted by a terrorist group or know someone who has.

Reported youth dissatisfaction with governments’ efforts to guarantee equal rights, maintain political stability, facilitate job creation, and provide healthcare services will not be easily remedied by the People’s Republic of China. Neither is Beijing likely to emerge as a champion of equality, freedom of speech, or free and fair elections—all factors that rank highly for young Africans.

With 74 percent of Africa’s youth identifying democracy as the preferable type of government, it may not be too late for American policymakers to take an interest in U.S.-Africa relations. The implications of a more pronounced U.S. presence on the continent could be significant—and with just two-in-five African youth trusting national leaders and local officials to do the right thing, geopolitical opportunities abound.