U.S. Jet Fighters Are Back in India For Wargames (The Last Two Times, the Indian Air Force Won) 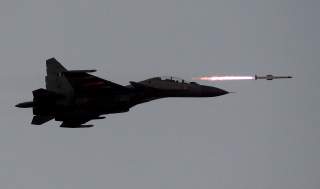 On December 3, 2018, the whine of turbofans resounded over West Bengal as U.S. Air Force F-15 Eagles soared down to land at Kalaikunda Air Station. Through December 15, the F-15C air superiority fighters will spar with Indian Air Force (IAF)  Mirage 2000 and Su-30MKI Flanker fighters, Jaguar attack jets and A50 AWACs radar planes. C-130Hs of the 182nd Airlift Wing are separately practicing alongside IAF C-130J and Il-78 transport planes—all under the auspice of exercise Cope India 2019.

Despite deepening ties between the U.S. and Indian military, the last Cope India exercises date back a decade or more—and caused considerable controversy.

The first in 2002 was an air transport drill that was part of a flurry of joint exercises marking the beginning of Washington’s courting of closer relations with New Delhi after 9/11. For the second, held in 2004 from February 15 to 28, the Pentagon dispatched six F-15Cs from the 3rd Fighter Wing at Elmendorf AFB, Alaska to Gwalior, in central India. There they sparred with IAF jets including single-engine Mirage 2000s and MiG-21 Bisons, twin-engine Su-30K and MiG-29 multi-role fighters, and MiG-27 ground attack jets.

After the exercise, word got out that the American fliers had been trounced, losing 90 percent of the engagements—eventually leading to an outcry in Congress.

How did the Indian pilots defeat ostensibly the most powerful air force on the planet? Did it reflect a flaw in U.S. training and doctrine, unfair scenarios, or even the superiority of the French and Russian fighter planes flown by India?

Maj. Mark Snowden later said in an interview, "The outcome of the exercise boils down to [the fact that] they ran tactics that were more advanced than we expected… we did not expect them to be a very well-trained air force. That was silly.”

As a result, the American fighter jocks employed straightforward tactics, flying their Eagles four-abreast and counting on their radars to detect the IAF jets first and allow them to be methodically dispatched.

But the IAF pilots didn’t prove so predictable.

“In general, it looked like they ran a broad spectrum of tactics and they were adaptive,” Snowden told media. “They would analyze what we were doing and then try something else. They weren't afraid to bring the strikers in high or low. They would move them around so that we could never anticipate from day to day what we were going to see.”

The IAF’s MiG-21 Bisons proved especially troublesome. An upgraded variant of the 1950s-era jet American fighters battled over Vietnam, the Bison had a relatively small radar cross-section of 2.5 meters squared (an F-15’s RCS is around 10m²) and was upgraded with a powerful Israeli jammer that reduced detection range. The allowed the MiG-21s to close for a Within Visual Range engagement.

Furthermore, the old MiGs were upgraded to employ deadly R-73 missiles that could be aimed by a Helmet-Mounted Sight to target aircraft within a wide aspect. Though the F-15Cs benefited from similarly-capable AIM-9X missiles and helmet mounted sights, this meant up close the Eagles were on even ground versus the 50s-era jets.

The MiG-21s might still have suffered due to their weaker radars but for the effectiveness of the IAF at networking sensor data between their Su-30 and Mirage 2000 jets, as Snowden explain: “…they built a very good [radar] picture of what we were doing and were able to make good decisions about when to roll [their aircraft] in and out.”

One final challenge vexing American fliers involved the IAF’s use of Russian R-77 and French Mica missiles with active radar-seekers, rather than relying on the launch aircraft to maintain a lock for guidance. Because the launch-fighters didn’t need to illuminate themselves by keeping their radars active, the Eagle pilots had trouble anticipating the attacks. By contrast, the AIM-120C only switched to an active seeker in its terminal phase.

However, there are some major caveats to U.S. performance in the exercise. First of all, the engagements were usually fought with a 3:1 numerical advantage for the Indian side—typically four Eagles versus twelve Indian fighters.

These were odds Americans pilots trained to face, but the rules of the exercise did not permit either side to fire missiles at ranges exceeding 21-25 miles—even though Beyond-Visual Range engagement using AIM-120C missiles (maximum range 65 miles) was emphasized by U.S. tactics. Nor did the U.S. fighters benefit from long-range AWACS radar support that is a cornerstone of U.S. air-to-air tactics. In a sense, the Eagles were akin to long-distance snipers forced to hunt adversaries in a dark room holding a candle.

Some also claim the Indian pilots were more experienced than the Americans, though Snowden’s own words state precisely the opposite. Finally, the Eagles at Gwalior lacked now-standard APG-63(V)3 Active Electronically Scanned Array radars with dramatically greater stealth, power and resolution. These would have given the F-15s a major detection edge and possibly helped see through the jamming.

Given these handicaps, some commentators speculated the Air Force did not mind getting whupped because the drubbing could be used to ask Congress to procure more F-22 and F-35 stealth fighters.

Next, between November 7 and 20, 2005, Cope India 06’ took place, this time involving single-engine F-16 jets from the 13th Fighter Squadron based at Kadena, Japan, facing India’s heavily-modernized Su-30MKI fighters. Though fewer details are available, most accounts suggest the American fliers were outperformed a second time.

The next documented Cope India in 2008 involved only transport units. None followed until 2018.

However, IAF Su-30MKIs participated in the U.S. Air Force’s annual Red Flag exercise in Nevada in 2008. This time, things reportedly didn’t go as smoothly for the Indian pilots.

A controversial video of a lecture by Col. Terrence Fornof reported that F-15s had “dominated” the Flankers. While he praised the IAF’s pilot’s skills, he noted they overused their aircraft’s vector-thrust engines while attempting to shake off American fighters. The Su-30MKI’s Saturn turbofans can tilt their nozzles, allowing an Su-30 to perform astounding maneuvers the American fighter can’t match—but those maneuvers also bleed off a lot of energy. American pilots would pull up and wait until the super-maneuverable Indian jets were recovering from those jaw-dropping maneuvers, then swoop down for the kill.

Fornof also claimed IAF pilots scored friendly-fire kills and were slow totake offf due to excessive concerns over debris entering the intakes (Foreign Object Damage). However, he rated the Su-30MKI slightly above the F-15C.

The speech received pushback from Indian and Russian sources, who claim the Indian pilots were handicapped by having to keep their powerful N011 Bars radar systems off (to deny the U.S. a chance to snoop on them) and relying on verbal information from AWACs controllers for lack of a compatible datalink. They also claim that prior to Red Flag itself, the Su-30s mostly prevailed in air-to-air duels with U.S. fighters at Mountain Home, Idaho.

For all the controversy surrounding those exercises, the Indian and American accounts both suggest that the exercises were done under conditions limiting the realism of Beyond-Visual Range air combat. In part, this is because neither party wishes to reveal their radar’s full capabilities!

However, such international exercises ideally help exchanges ideas, challenge doctrinal assumptions, and improve familiarity with the capabilities of foreign hardware and doctrine. By that measure, and despite bruised national egos, the exercises succeeded in giving both the U.S. and Indian Air Forces a lot to think about.