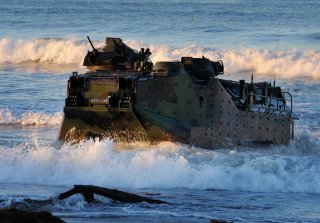 The new ACV, manufactured by BAE Systems, differs in several ways from the Marine's AAV. Unlike the legacy ship-to-shore troop transporter, the ACV opts for 8 large-diameter wheels rather than a tracked design. Though the USMC originally pushed against a wheeled design in favor of tracks, improvements to BAE’s design meant that the same level of off-road capability could be met via an 8-wheel drive design.

Both of these pale in comparison to China’s Type 05 amphibious fighting vehicle which is reported to reach speeds of 17+ mph on water thanks to a steeply-sloped retractable bow flap. It’s also more heavily armed than either the AAV or ACV in their current configurations. Depending on the variant, the Type 05 is armed with either a 30mm main gun or 105mm cannon.

Although the USMC expects all of the ACVs to be fielded next year will be the troop transport variant, there is also a project in the works to equip some ACVs with a powerful 30-millimeter cannon. The large gun is similar to the 30mm main gun that the Army is currently developing for their Stryker series of vehicles.

If successful, this would be an enormous firepower upgrade for the Marine Corps’ ship to shore capabilities. By comparison, the older AAV current armament, the .50 caliber heavy machine gun and a 40mm grenade launcher, do not offer the range or penetration power against armored targets that a 30mm main gun could. Currently, the Corps is also trying to up-gun their JLTV by mating a small 30mm main gun to the roof.

Although BAE’s ACV doesn’t necessarily offer a huge improvement in terms of speed in the water—arguable the most dangerous place for amphibious vehicles—it does have other features that make it more survivable on land, including a blast-mitigating troops' seats and a blast-resistant hull, and possible a big firepower upgrade in the near future.

The ACV’s potential is expected to increase thanks to a design that BAE claims can integrate future technologies and weapon systems. What should be first on that list—speed in the water. Still, the ACV is an over-due improvement and will likely be a welcome addition to the Marine Corps.