The U.S. Marine Corps’ Newest Grenade Is Insane (It Flies) 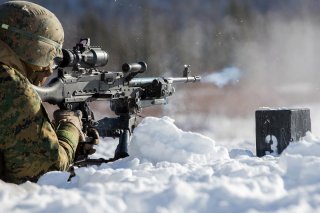 Pretty Amazing: Not only does the little exploding drone fly, but it can also be equipped with a camera, as well as a variety of other payloads.

Drone40: A New Drone Is Coming for the USMC

The United States Marine Corps (USMC) is testing out a unique — and potentially game-changing drone. Unlike most drones, however, this little gadget, called the Drone40, can be launched from standard 40mm grenade launchers and is recoverable and reusable.

The company that manufactures the Drone40, the Australia-based Defendtex, describes their drone as an “autonomous, loitering grande deployed from either a 40mm grenade launcher or hand launch. Drone40 gives a single soldier multiple round simultaneous impact (MRSI) capabilities. Utilizing a standard 40mm grenade launcher, multiple munitions can be launched, each munition working as a force multiplier.”

The Drone40 can also be launched by hand, apparently controlled via a smartphone or tablet. After launching, the Drone40’s four small electric rotors deploy and can carry the drone quite a distance — according to the company, their Drone40 can travel over 12 miles, with a maximum flight duration of 30 to 60 minutes depending on payload. And there are quite a few options.

The little flying grenade can carry a smoke or flash payload, or alternative a small explosive charge, laser designator, an electronic warfare function, as well as conduct intelligence, surveillance, and reconnaissance thanks to a small onboard camera with the video feed. The below video shows the Drone40 in action and is well worth a watch.

As previously reported, the small Drone40 was initially put through its paces by the British Army earlier this year, during the British involvement in Mali as part of the United Nations Multidimensional Integrated Stabilization Mission (MINUSMA).

A caption accompanying the photos states that the experimental Marine infantry battalion testing the drone is to “test new gear, operating concepts and force structures, and that “the unit’s findings will help refine infantry battalions across the Marine Corps in accordance with Force Design 2030.”

The Drone40 is capable of traveling on autopilot, as well as working in tandem with other Drone40s, giving the flying grenade a swarm capability. According to the manufacturer, the drones are capable of “multiple round simultaneous impact,” in theory allowing a single Marine to fire multiple Drone40 munitions in succession.

One interesting (albeit still theoretical) application for the Marine Corps could be to pair the Drone40 with the M32A1, a 6-shot revolver style multiple grenade launcher. In this configuration, a single Marine could launch half a dozen Drone40s in just a few seconds. Once airborne, the group of Drone40s could fly — all together — and drop over a pound and a half of high explosive on a specific target.