The U.S. Marine Corps is Deactivating All Tank Battalions (Thanks to China?) 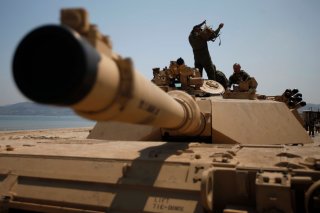 During the current coronavirus pandemic, a huge amount of real and fake news has been published about animals returning to urban areas and expanding natural growth due to reduced human activities. But here is one piece of genuine, fact-checked information: the Marines are getting in touch with their aquatic roots and returning to the sea.

As I’ve previously written, the Marines are taking steps to divest much of their armor, and one of the notable examples is the Marines’ Light Armored Vehicles, or LAVs, which are eventually slated to get the axe. But, the Corps’ LAVs aren’t the only ones in for it, so are the USMC’s heavier armored vehicles, the fabled M1 Abrams main battle tanks.

The Commandant of the Marine Corps, General David Berger, explained why the Corps is moving to get rid of their armored capabilities. “What we have to do now is transition to a lighter footprint, more expeditionary, more in support of a littoral environment,” Berger said. The emphasis for the Marine Corps now is to enable the force to “collect forward of itself even if offshore into the water.”

It’s all part of the Marine Corps aggressive Force Design 2030 that was released earlier this year. The plans calls for the USMC’s mission focus to shift from violent non-state actors in the Middle East to peer or near-peer rivals in the Indo-Pacific region with an emphasis on littoral and ship-to-shore operations. This is of course a massive shift and will require a huge readjustment to the Corps in terms of force structure and equipment.

Heavy, land-going armored vehicles naturally just don’t fit within that framework, and neither do tanks. It should come as no surprise then, that the Marine Corps is officially shutting down all their tank battalions.

Tanks battalions in Twentynine Palms and Camp Pendleton, California have already begun deactivation, marking the beginning of the end for the Corps’ 400-odd M1 Abrams tanks. In total, about 1,300 Marines will be affected by the tank deactivations, and four Military Occupational Specialties (MOS) will be scratched due to the deactivations, forcing former tankers to move laterally into other occupational positions.

One Marine commenting on his unit’s tank retirement had the following to say to his fellow Marines during their deactivation ceremony. “Remember that our tanks were just weapon systems…a damn fine weapon system, but nonetheless, just equipment. You individual Marines were always the key to the company’s success.”