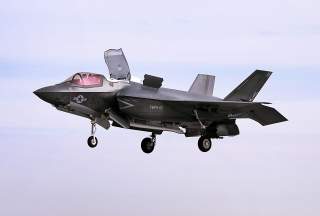 A squadron of U.S. Marine Corps F-35B stealth fighters will embark on the Royal Navy’s new aircraft carrier HMS Queen Elizabeth in 2021 when the vessel sails on her first operational deployment.

“We’re not talking about interoperability anymore; we’re talking about proper integration to a level we’ve never seen,” Kyd told McClear on Queen Elizabeth as the ship and her escorts sailed along the U.S. east coast as part of the carrier group’s work-up for its 2021 first operational deployment.

U.S. Marines and their F-35s have begun paying visits to Queen Elizabeth during her current training deployment in order to prepare for the future, front-line cruise.

Kyd characterized the planned, mixed air wing as an important defense of the U.S.-led world order. “Why wouldn’t we be far more integrated with our key ally at a moment where the rules-based international system is under threat, and we need to reinforce our Western values and operate together?”

But there’s another, more prosaic explanation for the plan to embark American and British F-35s on a British carrier. The British military probably won’t have enough F-35s of its own to fully equip an air wing in time for the 2021 cruise.

As of late 2019, the United Kingdom has ordered just 33 vertical-landing F-35Bs against a near-term inventory goal of 48 of the fighters. Around 17 are in service. The RAF plans to operate F-35Bs in just four front-line squadrons jointly staffed by air force and navy personnel. Each unit will have 12 ready fighters.

Each of the navy’s two Queen Elizabeth-class carriers -- the second vessel HMS Prince of Wales is undergoing trials -- has space for around 40 fighters. For the next decade or so as the RAF F-35 fleet slowly expands, it’s unlikely the air force will have the capacity simultaneously to embark fighters on both carriers.

Thus it’s not for no reason that the Royal Navy plans to embark on its carriers contingents of U.S. Marine Corps F-35s.

The Marines meanwhile have begun employing U.S. Navy assault ships as light carriers by swapping out helicopters for F-35s, allowing each of the 40,000-ton-displacement ships to embark a dozen or more jets.

But for the Marines, the proliferation of medium and small aircraft carriers in the navies of key U.S. allies represents an opportunity to embark more stealth fighters on more ships in more places.

The Corps as early as 2015 first floated the idea of placing its own F-35s on a British ship. Twice in the 2015 edition of the Marines’ official aviation plan, the Corps proposes to send its F-35s into combat aboard British carriers.

In a section about so-called “distributed operations,” wherein the Marines spread out their forces in order to make it harder for the enemy to target them, the plan foresees F-35s—scattered across the battlefield—periodically returning to a ship for repairs.

The vessel could be an American amphibious assault ship “or a coalition carrier, such as the U.K.’s Queen Elizabeth,” according to the document.

In addition to deploying F-35s on Queen Elizabeth, the Marines have signalled that they could fly stealth fighters from the decks of the new light carriers that South Korea plans to build. Lt. Gen. Lewis Craparotta, the commander of U.S. Marine Corps Forces Pacific, told reporters there's no reason vertical-landing F-35s couldn't operate from the South Korean ships.

Craparotta said his Marines' "readiness improves every time they come to train" with the South Koreans.