The U.S. Marines Are Using F-35s To Bring the Fight to China, Russia, and Iran 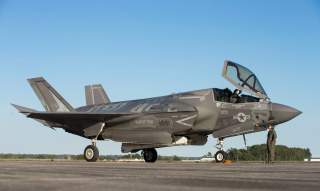 Key point (This first appeared in 2016): America may be able to penetrate enemy anti-access/aerial-denial zones.

If the testing leads to operational use, the Marines’ F-35s could function essentially as fast, armed, radar-evading surrogates for the Navy’s E-2 radar planes — extending the detection and engagement range of a variety of munitions.

Marine Corps headquarters slipped its announcement of the testing into a Sept. 1, 2016 update on F-35B testing. The Corps declared its first F-35B squadron combat-ready in July 2015, but operational testing of the stealthy warplane continues.

Next up, according to Marine Corps headquarters — tests of the F-35B’s compatibility with the Naval Integrated Fire Control Counterair network, or NIFC-CA. The announcement did not say when the NIFC-CA testing would take place, but the Navy had previously stated that it would test F-35s with NIFC-CA in September 2016 at White Sands Missile Range in New Mexico.

That test would involve F-35s detecting targets for a land-based battery of SM-6 surface-to-air missiles. It’s not clear if the Marines are joining the Navy’s F-35-NIFC-CA testing or conducting separate trials on their own.

Poorly understood outside of naval circles, NIFC-CA is arguably one of the most important developments in the U.S. military. NIFC-CA is, in essence, a network architecture that combines several different sensors, datalinks and munitions.

NIFC-CA allows, say, an aircraft to pass targeting data to a warship armed with SM-6 missiles. The SM-6 — a 22-foot-long weapon that mates a two-stage rocket booster with the seeker head of an AIM-120. The Navy hasn’t released the SM-6's maximum range, but it could be as great as 250 miles. The sailing branch did claim that one 2014 at-sea test of the SM-6 resulted in the longest-range surface-to-air engagement in history.

In any event, the SM-6 clearly can “shoot” farther than a warship’s sensors can “see.” But if an aircraft flying far ahead of the ship can relay its own targeting tracks, it can help the SM-6 to strike at its farther-possible range.

NIFC-CA began entering frontline service in 2013. At present, the standard application of NIFC-CA combines SM-6-armed destroyers with Navy E-2D radar-early-warning planes. But there are only a handful of E-2Ds in service. The Navy wants to add more aircraft and munition types, including surface-to-surface weapons, to the NIFC-CA architecture — and clearly the Marines want in, too.

If the upcoming F-35B-NIFC-CA testing proves fruitful, it’s possible that, in future wars, F-35Bs flying from Navy assault ships or even from British aircraft carriers or land bases, could stealthily penetrate enemy air defenses, detect enemy ships, planes and even ground forces and cue U.S. warships to lob far-flying missiles over the horizon at the targets.

The expansion of the NIFC-CA network has reassured U.S. military leaders that American naval forces should be able to defeat so-called “anti-access area-denial” systems — radars, jet fighters, ballistic missiles, etc. — that China, Russia and Iran are creating in order to keep U.S. forces away from their borders.

Asked in August 2016 whether the Navy’s aircraft carriers could safely operate inside enemy anti-access umbrellas, Adm. John Richardson was unequivocal. “Yes,” Richardson said. Adding the Marines’ F-35Bs to the Navy’s fire-control network should only boost his confidence.