The U.S. Marines Have a New Master Plan to Invade Any Country 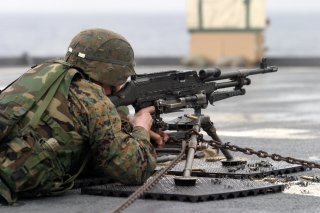 Historical footage of Marines during World War II are replete with images of tens of thousands of Marines embarking from hundreds of ships, chugging to shore towards volcanic sand beaches. In broad daylight, Higgins boats loaded with Marines pull slowly towards beachheads, covered by fire from destroyers and other U.S. Navy ships, but also taking fire from entrenched Japanese defenders.

A potential future conflict in the Pacific could again see Marines assaulting enemy-held Pacific islands, though today’s Marines would utilize new techniques and updated equipment to get to shore. Here’s how.

In a throwback to the middle of the last century, a recent Marine Corps exercise saw Marines again race towards sandy beaches, though instead of slow, mostly wooden troop transports, smaller groups of Marines sped landward under the cover of darkness on inflatable rubber boats equipped with powerful outboard engines. And in a departure from the amphibious assaults of the previous century, Marines also parachuting from V-22 Ospreys, tiltrotor aircraft with a high payload capacity and range.

Although this recent exercise took place near Hawaii and Japan, the small-unit infiltration and nighttime assault techniques are applicable elsewhere. “These operations can be replicated on any island in the Indo-Pacific, and working with our joint partners allows us to refine the tactics, techniques, and procedures to do this in a real-world situation,” said Lt. Col. Roe Lemons, a Marine officer who helped plan much of the exercise in Japan. “We are coming in with stealth, extending the reach of our long-range fires, and working on our ability to sustain that as long as the maritime force needs us to control an access point to the sea lines of communication.”

One of the more unusual techniques saw Marines aiming Javelin anti-tank missiles from boats, an unusual role for a missile designed to take out tanks and other armored vehicles. Thanks to a top-attack flight mode, Javelins are useful against a variety of armored targets, though their flight profile can be adjusted to better target static fortifications as well.

The fire-and-forget missile system is well regarded for both accuracy as well as range, which can in some firing conditions can approach three miles. Though the Javelin is not exactly light-weight (it weighs nearly fifty pounds when loaded), weight is not necessarily as much of an issue when fired from a vehicle like a boat. They provide Marines and other infantry with a powerful, mobile anti-armor and anti-fortification capability—and they can be fired at night.

Using the cover of darkness, Javelin-armed Marines would be able to leverage the Javelin’s 12x magnification thermal sight to acquire targets on land from far out at sea or to otherwise surveil potential beach landing areas. Counterintuitive though it may sound, firing Javelin’s from boats at sea could potentially be safer than firing from land, as the missile’s backblast wouldn’t kick up dirt, dust, or rocks.

Regardless of how exactly Marines reinvent the role of weapons like the Javelin, significant change is in the Corps’ future more broadly. Pivoting from long, grinding land wars in the Middle East to high-speed raids and amphibious assaults from the sea has radically altered the Corps’ force structure. Javelin-toting Marines on boats could prove to be a valuable combination in a future Pacific conflict—and likely not the only innovation to be seen from a branch that places a premium on individual initiative and unusual solutions to complex problems.