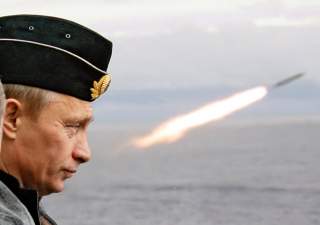 Amid America’s national meltdown over the future Space Force, the State Department implied that the militarization of space is well underway. In a recent press briefing, Assistant Secretary of State for Arms Control Dr. Yleem D.S. Poblete suggested that a group of Russian satellites may have been placed in orbit as a weapon against U.S. space assets, an orbital parasite that may be able to maneuver in orbit, evade U.S. sensors, and disable, attack, or otherwise interfere with other orbiting objects like reconnaissance and GPS satellites.

- Poblete stated that in October 2017, the Russian Ministry of Defense deployed a space object they claimed was a “space apparatus inspector,” per C4ISR’s reporting, whose behavior “was inconsistent with anything seen before from on-orbit inspection or space situational awareness capabilities, including other Russian inspection satellite activities.”

- Foxtrot Alpha’s Jason Torchinsky has identified three possible Russian satellites (Kosmos-2519, 2521, and 2523) that both meet the description offered by the State Department and have exhibited such anomalous behavior in orbit.

- The capability to maneuver in space and interact with other space objects is also a mission capability the Air Force has pursued for years. The U.S. has launched the X-37B unmanned space drone, which may have the capability to seize satellites with its tiny adorable drone cargo hold and the maneuverability to potentially operate as a satellite hunter.

- Concern over Russian satellites may be overblown: While the country’s own “space force” has existed in various incarnations since 1992, funding and innovation have for the most part tanked, with the country becoming dependent on older Soviet-era launch systems and no modern replacements in sight.

So what does this all mean? Put it this way: In the 2013 film Gravity, a wayward Russian anti-satellite missile test spirals into a low orbit catastrophe. But luckily the entire human race (and Jennifer Lopez, I guess), it appears that the Russians have learned from this parable of unforeseen consequences and decided to go for a more elegant, James Bond-esque solution: Instead of a messy, ham-fisted missile, just use a tiny satellite that deploys from a larger satellite to maneuver and mess with other key space assets.

This development, if fully confirmed, lends credibility to the creation of a new branch dedicated to locating and defending against terrifying Russian (or Chinese) orbital systems designed to attack the very satellites we use to detect nuclear missile launches. But before we all have a Sputnik-style heart attack, its worth remembering that the U.S. has invested massive amounts of private and public money towards space superiority. So the next time you see a strange blip in the sky, breathe easy: the first real space war likely won’t be here in your lifetime.