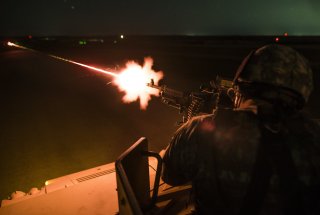 Massive numbers of small drones around the world are presenting an entirely new threat landscape for the Pentagon which must now confront networks of AI-enabled, coordinated attack drones sharing information, passing along targeting details and in some cases even exploding themselves upon high-value target areas.

“Commercial manufacturers and nation-states are improving performance, reliability, and survivability of sUAS. Low-cost systems are increasingly available around the world,” the strategy writes.

The strategy is clear to point out that the growing dangers are not restricted to single systems or even groups of single systems but rather integrated fields of attack drones with greater levels of autonomy and coordination with manned platforms.

The systems themselves are now much more advanced and armed with AI-enabled sensors, guided weapons and an ability to launch previously impossible kinds of attacks. Autonomous drones can now be equipped with the technical ability to find targets, pass them off to other drones and simultaneously and in real-time cue other, potentially larger and more lethal attack weapons.

“These more capable systems have extended range, payload, and employment options. Some of these systems can fit in the palm of a hand, perform military missions, and conduct novel offensive or defensive operations not traditionally associated with the platform,” the strategy states.

Furthermore, AI itself, which naturally enables breakthrough levels of automation, autonomy and information sharing, can rely upon advanced sensor algorithms to gather otherwise separated pools of data and combine, organize and analyze them to present optimized solutions for commanders in need of information quickly.

“The impending integration of artificial intelligence with autonomous sUAS will introduce yet another dramatic change to the character of warfare,” the study writes.

For example, the technology enabling a drone to autonomously detect, track and attack high-value targets without needing human intervention is here, presenting tactical and ethical dilemmas for commanders. The biggest concern among Pentagon war planners is that adversaries will not adhere to the ethical and doctrinal limitations now embraced by the U.S., which stipulates that any decisions regarding the use of lethal force need to be made by human decision-makers.