The U.S. Military Is Bulking Up in Eastern Europe to Take on Russia 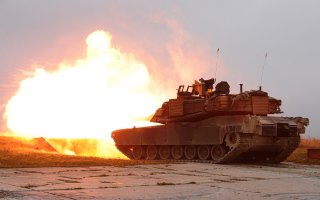 The Pentagon is putting more eyes in the sky over Eastern Europe in what could be seen as a fast-progressing pivot toward strengthening deterrence against Russia throughout the continent, a series of initiatives that includes more multinational training exercises, development of land-fired long-range cruise missiles, and surveillance assets in strategically vital areas.

The Air Force’s 25th Attack Group is shifting its operational focus from Central Command operations in the Middle East supporting campaigns in Afghanistan and against what’s left of ISIS, to stepped-up operations with the U.S. Air Forces in Europe. The effort includes sending MQ-9 Reaper drones to Romania. The so-called “split-operations” will keep some ISR assets in the CentCom region, while sending others to Romania.

“The MQ-9 weapon system is continuously evolving to nest within Air Force initiatives to operate in and from contested environments against near-peer adversaries,” an Air Force report says.

This development is not only significant in that it adds highly sought after drone surveillance throughout potentially contested or tense areas in Eastern Europe but it also represents the tactical evolution of the Reaper drone from a primary counterinsurgency mission support surveillance of insurgents and terrorist in what’s called uncontested areas, into an air combat platform able to add enormous value in a potentially massive, great power war.  Clearly, the Reaper’s effective role in drone strikes against terrorists points to the technical effectiveness and precision with which it is able to track and destroy enemy targets, attributes which might also prove valuable in great power conflict.

While the Predator may not be considered “stealthy” per say, the Air Force has for several years now been maturing and changing the drone to better prepare it for contested environments should it need to operate against a sophisticated high-tech enemy.  The weapons attack envelope or armaments for the Reaper, have been massively expanded in recent years to include the addition of AIM-9X air-to-air missiles. The MQ-9 Reaper currently fires the AGM-114 Hellfire missile, a 500-pound laser-guided weapon called the GBU-12 Paveway II, and Joint Direct Attack Munitions or JDAMs which are free-fall bombs engineered with a GPS and Inertial Navigation Systems guidance kit.

The Air Force currently operates more than 100 MQ-9 Reaper drones and has, in recent years, begun configuring the platform with additional fuel tanks to substantially build upon the current 4,000-pound fuel capacity of the drone with a range of 1,150 miles. The upgrades to MQ-9 Reaper are designed to add two 1,350-pound fuel tanks to increase the drone’s endurance from sixteen hours to more than twenty-two hours. Additional dwell time and mission scope for the MQ-9 Reaper could make a lot of sense in Eastern Europe given how expansive the geography is along the Russian border. Surveillance assets will likely be in demand both in Northern Eastern Europe near the Baltics as well as key Southern areas of Eastern Europe to include the Black Sea and countries such as Romania.