The U.S. Military Doesn't Know How Many Troops, Ships or Which Fighter Jets It Needs 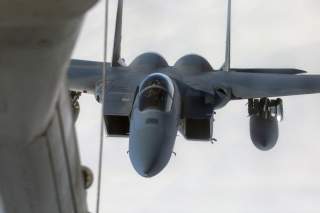 The Pentagon lacks a reliable process for deciding how many troops and weapons it needs. The analytical gap is getting worse as Chinese and Russian forces grow increasingly sophisticated and challenge the U.S. Defense Department's assumptions.

That's the worrying conclusion of a new report from the Government Accountability Office.

The report could help to explain why the U.S. Navy insists it needs as many as 355 warships, up from 287 in 2019, and yet for 2020 has proposed to decommission early one aircraft carrier, delay amphibious-ship construction and cancel a new cruiser program.

Likewise, the report could shed some light on the tortured planning process that resulted in the U.S. Air Force insisting, for years, that it wouldn't buy any more non-stealthy fighters, and then abruptly adding a billion dollars worth of upgraded F-15s to its 2020 budget proposal.

"The central challenge to U.S. prosperity and security is the reemergence of long-term, strategic competition with 'revisionist powers' China and Russia," the GAO concludes in its March 2019 report, citing the Trump administration's official national-security strategy, which the White House revealed in late 2017.

"After two decades of unchallenged U.S. military dominance, the strategy notes that the future strategic environment demands analysis that accepts uncertainty and complexity and that is capable of driving innovation amid rapidly changing threats," the GAO continues.

"U.S. military advantage, as stated in the strategy, has been eroding as rapid technological changes spread globally and potential adversaries actively seek to undermine [the Defense Department]’s advantages. The strategy concludes that the department must pursue urgent change at a significant scale and starkly warns that failure to properly implement the strategy will rapidly result in a force that is irrelevant to the threats it will face."

But there's a problem. While the need for the Pentagon to change its mix of troops, vehicles, planes, ships, missiles and satellites is growing more urgent, the "strategic analysis" process by which the Defense Department determines its new force mix is anything but urgent. "Strategic analysis has not provided senior leaders with needed analytic support," the GAO explains.

The strategic analysis process breaks down into three separate "products," according to the GAO. The Defense Planning Scenario is a "high-level description of a plausible threat, the strategic approach to address it and assumptions that should be used to guide Concept of Operations and force development, including information on adversary capabilities and the strategic objectives."

The resulting concept of operations, or CONOPS, is a "description of the operational approach to address the threat identified in the Defense Planning Scenario and the major force-structure elements (e.g., ships and fighter squadrons) used in that approach."

Finally, there's the Cost Assessment and Program Evaluation, or CAPE, which according to the GAO is "the refined estimate of the numbers and types of units needed to support the CONOPS."

But those threat analyses take so long to produce -- up to two years, the GAO found -- that they've become all but useless. The world changes faster than the analyses can keep up.

The problem got so bad that, in 2012, analysts at the CAPE office in their own work simply stopped referencing the Defense Planning Scenario's threat assessments, the GAO found. In other words, the Pentagon's high-level and low-level force-structure analysts just stopped talking to each other.

CAPE championed the plan to begin buying upgraded F-15EX fighters from Boeing starting in 2020, despite the 50-year-old F-15 design's lack of stealth. The office of acting defense secretary Patrick Shanahan, a former Boeing executive, agreed with CAPE and compelled the Air Force to add the F-15s to the budget, over the objections of Air Force officials who for years had insisted on only acquiring stealth fighters such as F-35s.

CAPE argued that the F-15EXs efficiently could replace the 40-year-old F-15Cs that fly defensive patrols over the United States. The Air Force could continue buying F-35s for dangerous offensive missions. Lawmakers have begun to weigh in as they mull the military's 2020 budget proposal.

Analysts at CAPE and the Air Force's own analysts clearly disagreed on fighter force-structure. And the Pentagon's broken analysis system failed to resolve the spat before it became a political issue.

It's past time for the Defense Department to fix its analysis process, the GAO claims. But the GAO isn't optimistic. The Pentagon "has attempted reforms in the past without success."