The U.S. Military Has a Big Problem: It Can't Win Wars 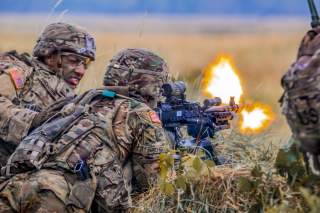 “This time, they think they have it right.”

So declared an Associated Press story reporting an upbeat assessment by this country’s top military officer at the end of a five-day visit to Afghanistan earlier this spring. Marine general Joseph Dunford Jr., chairman of the Joint Chiefs of Staff, was heading home from the war zone, the A.P. reporter wrote, “with a palpable sense of optimism” about the U.S.-supported war against Taliban and Islamic State fighters there.

Light at the end of the tunnel, perhaps?

The story didn’t say whether any of the reporters listening to Dunford asked why it had taken more than 16 years for the world’s leading military power to come up with the “fundamentally different approach” that the general believes has put U.S. and Afghan forces on the path to success.

None of the changes he mentioned really sounded fundamental, either. Still, it’s a question worth asking. If Americans are right in ceaselessly telling themselves that theirs is the most powerful country the world has ever seen and that their military is the “greatest fighting force ever,” as Pres. Donald Trump calls it, should it have been this hard and taken this long to find a way — if they really have — to defeat enemies whose war-making resources are a tiny fraction of ours?

As has happened often during our current conflicts, that piece of news from Afghanistan got me thinking about an earlier war that I witnessed first-hand as a correspondent for The Baltimore Sun during its final three years.

In Vietnam, as in subsequent American wars, the United States and its local allies had staggering advantages in all the conventional measures of military strength, yet failed to win. It makes me wonder — if U.S. political and military leaders and the American public remembered Vietnam more honestly, if painful truths hadn’t been cloaked in comforting mythologies, might this country have responded more intelligently and effectively to the violent challenges we’ve faced in the current century?

Consider, for example, the persistent story that America lost in Vietnam because U.S. troops fought with one hand tied behind their backs — because, that is, the politicians were “afraid to let them win,” as Pres. Ronald Reagan once put it. The implication is clear: we could and should have won that war by doing more of what we were already doing or keeping at it longer.

But did the United States really lose in Vietnam for lack of force?

Not exactly a limited war

Plenty of facts suggest otherwise. Take the amount of destructive power the U.S. employed. “Devastating conventional firepower unparalleled in military history,” a study by the Army’s logistics command called it, adding that, along with extraordinary tonnages of air and ground ordnance, American commanders fought with virtually no restrictions on mobility, equipment or supplies. “The logistics scene was characterized by almost unlimited supply, remarkable high operational readiness rates as applied to equipment, a seemingly endless flow of ammunition and petroleum and immunity for the most part from external fiscal restraints.”

Even to one who heard a bit of the gunfire from time to time, the statistics on U.S. firepower are mind-boggling. Pentagon records show that, for long periods, the American military and Saigon government forces fired ammunition at rates up to an astonishing 600 times higher than the enemy’s — 100,000 tons of ground munitions a month for all of 1969, for example, compared to just 150 tons from the Communist side.

In 1974, with U.S. forces no longer directly engaged in combat and allied South Vietnamese commanders moaning nonstop about shortages caused by reductions in American military aid, Saigon’s forces still used 65 tons of ammunition for every ton fired by the enemy.

Those figures don’t include air ordnance, which would make the ratios even more grotesquely one-sided. Over the course of the war, U.S. aircraft dropped approximately twice as many tons of bombs on North Vietnam, South Vietnam, Laos and Cambodia as combined Allied forces dropped on Germany and Japan in World War II.

In light of those numbers, the claim that America’s war in Vietnam was fought under undue restrictions is less than convincing. If U.S. troops couldn’t win — or leave our ally in a position to win — after fighting for seven years with an almost unimaginable edge in firepower, technology, and mobility, the much more logical conclusion is that U.S. military doctrine and Washington’s concept of military strength simply did not apply to that conflict.

And what about the doctrine that a later generation of U.S. soldiers took with them into Afghanistan and Iraq?

Defeat any adversary? Control any situation?

Nine-tenths of the way to the year 2020, U.S. soldiers, with all of their firepower and technology, have not achieved anything close to total dominance on the battlefields where they have been engaged. They have not dominated poorly armed fighters. Or insurgents planting low-tech, low-cost explosive devices. Or local cops and officials whom we would like to stop shaking down citizens and undermining the public support we say is crucial for counterinsurgency warfare.

To put it bluntly, the experience of the last nearly 17 years makes “full spectrum dominance” sound like a delusional fantasy.

When the large-scale U.S. intervention in Vietnam began, the great triumph of World War II was just 20 years in the past. That war was the formative experience for the generation of senior officers who led the American military into Vietnam, so perhaps their arrogance was understandable. The inventors of full spectrum dominance and the commanders they influenced came along almost exactly the same number of years after Vietnam, which makes their illusion of omnipotence harder to understand.

At the other end of their respective wars, members of both groups insisted and continue to insist that the fault was not in their strategy or how they conducted it. Instead, they claim, they were denied success because the politicians limited them too much or made them stop too soon.

There’s no way to prove or disprove counterfactual statements of that sort, but given the length of time they had to win those wars — twice as long (in Vietnam) or three times (in Iraq) or close to four times as many years (in Afghanistan) as it took to reach victory in World War II — that claim, like the one-hand-behind-the-back argument, has a very hollow ring to it.

If my computer’s search function is working properly, the words “ally,” “allied,” “host government” and “local forces” appear nowhere in the “Joint Vision 2020” paper. That’s a telling omission. In Vietnam and our more recent wars, the weaknesses of Washington’s local partners — which U.S. officials have been stunningly reluctant to recognize — should be seen as the fundamental reason those wars have been so unsuccessful despite the overwhelming advantage in material resources that U.S. forces and their allies possessed.

There’s an implication here for the American approach to intelligence, in both the narrow and broad senses of the word. While rethinking what military power means, perhaps we should reconsider what intelligence means, too. In particular, it would be useful to revisit the classic premise — stated more than 2,500 years ago by the Chinese sage Sun Tzu — that the first goal of intelligence is to “know your enemy.”

It certainly would have been helpful in the last half-century’s wars if American commanders had known their opponents better. In Vietnam and since, though, by far the most damaging intelligence failure wasn’t not knowing our enemies well enough, but not knowing our friends. Consistently in these wars, Americans have overestimated their local ally’s capabilities while remaining blind, whether purposely or not, to the grave weaknesses of those forces.

In Vietnam, American weapons, dollars, and advice created a South Vietnamese army that, on paper, should have easily defended its country, as Americans told themselves it could. But U.S. money and material did not make that ally’s commanders effective or competent, or compensate for the inadequate leadership that was, in the end, the critical reason for South Vietnam’s defeat by a much poorer but more skillful, disciplined, and resourceful opponent.

A strong case can be made that the American-allied Saigon regime’s single most toxic weakness was pervasive corruption. It wasn’t just that corruption angered and alienated the South Vietnamese populace, including the regime’s own soldiers. That was damaging enough, but the greater damage was that corruption fatally undermined the ability of both the government and the army to do their jobs. A 1966 memorandum by a study group in the U.S. mission in Saigon made that point in sharp terms.