The U.S. Military Has a Plan to Beat Russian, Chinese and Iranian Missiles 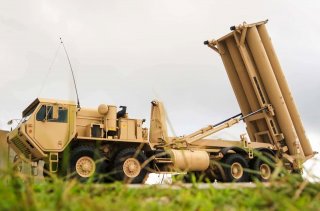 Russia maintains one of the largest missile inventories in the world, China and Iran both possess more than 1,000 ballistic missiles and North Korea is fast-advancing its own nuclear-armed long-range missile program. All of these realities have been cited by the Pentagon as a reason to massively modernize and increase its layered systems of missile defense weapons.

Citing the 2019 Missile Defense Review, Victorino G. Mercado, Assistant Secretary of Defense (Strategy, Plans, and Capabilities), told reporters that each of the military services were respectively increasing the volume and technological sophistication of their missile defense arsenal.

“The United States is responding to improvements in adversary missiles by increasing our capacity in procuring additional Patriot, THAAD (Terminal High Altitude Air Defense) and sea-based SM-3 and SM-6 interceptors,” Mercado told reporters according to a Pentagon transcript.

These systems are not only being increased in terms of sheer numbers but also being configured with advanced technical upgrades making them more capable against advanced threats.

All of these systems have been going through software and hardware upgrades in recent years to increased precision targeting, range and sensor discrimination technology, among other things. A new SM-3IIA variant is now being developed for possible use against intercontinental ballistic missiles (ICBMs), an initiative which would expand its defensive envelope. For instance, the SM-6 is being upgraded with an advanced dual-mode seeker, enabling it to more easily change course in flight and respond to moving targets. Instead of needing to rely upon a ship-based illuminator for guidance, a dual-mode SM-6 seeker has its own built-in electromagnetic sensor and is able to receive return radar “pings” independently, allowing the missile to change course as needed.

Patriot and THAAD missiles have also received upgraded radar, software and guidance systems. The thrust of these upgrades is to extend the effective operational performance of the weapons to respond to new threats, all while bridging the gap until new systems emerge. The Patriot, for example, has already shown it can network with an airborne F-35 to relay target information and pinpoint threats throughout multiple domains at once.

The Army has completed several operational tests of its upgraded Patriot missile, engineered with next-generation radar, electronics, software and fire control technology to enable the weapon to destroy a wider range of enemy attacks, service leaders said. Army efforts to upgrade the radar, fire control technology and flight software for the Patriot missile are, among other things, designed to sharpen its target tracking ability against approaching enemy attacks.

Mercado added additional details about how the threat environment is dictating the need for a massive, coordinated response. China, for instance, is fast-advancing its nuclear capable DF-26 anti-ship guided missile, and Russia has new missiles able to hold U.S. allies in the North Atlantic Treaty Organization at risk to a greater extent.

Along with adding more ship and land-based interceptors, the Pentagon is also upgrading its current arsenal of forty-four ICBM-killing Ground Based Interceptors to help bridge the gap before a new Next-Generation Interceptor is ready in 2028.

Improvements to the GBI system include hardware upgrades and, as Mercado put it, “software advances to enhance sensor performance and continuing the integration of the Space-based Kill Assessment capability.”