The U.S. Military Needs to Fix This If It Wants Any Shot at Winning a War with China 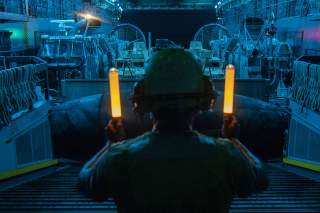 Key Point: The U.S. military’s fleet of sealift ships is too small reliably to resupply farflung American forces in the event of a major war. And the U.S. Navy lacks the warships to escort and protect what few sealift ships the military does possess.

That’s the dire warning that a range of experts have sounded as the Pentagon shifts its focus from counterinsurgency campaigns, which heavily rely on civilian logistics networks, to the possibility of war with a major power such as China.

In a war with China, America’s logistical forces would be a prime target. But the U.S. sealift fleet can neither defend itself nor absorb heavy losses, the Washington, D.C. Center for Strategic and Budgetary Assessment explained in a May 2019 report.

Last October [2018], the U.S. Maritime administrator, retired rear admiral Mark Buzby, said the Navy told his agency that it would not be able to escort sealift and supply ships during a major war. For those ships to survive, crews have been told to “go fast and stay quiet,” with the latter referring to reduced electronic signaling. But MSC ships, with sustained speeds of 15 to 20 knots, can’t go as fast as 30-knot Navy warships.

Also, in May [2019], defense analyst Loren Thompson wrote in Forbes that the well-trained and equipped U.S. military is facing “a big operational challenge that few policymakers or politicians are even aware of — its ability to get to the fight is wasting away. So even with the most capable fighting force in history, the United States might find itself unable to respond effectively to future military contingencies. … Until recently, military planners could at least assume the safety of commercial sea lanes outside war zones. But now even that assumption is being called into question.”

[Military Sealift Command] commander Rear Adm. Dee L. Mewbourne in 2017 told Seapower, “The operating environment is changing,” going from “unchallenged sea to contest waters. … I would maintain that the debate over whether we’re sailing in contested waters is over.” Looking at the situation today, “there is a persistent threat to the ships that are going through those areas,” Mewbourne added, citing missile attacks on U.S. and other ships sailing near Yemen and China’s growing sea-denial capabilities.

“The question might be, ‘Will it be like it is, or could it get worse?’ I would suggest it’s the latter,” Mewbourne said, showing a graph depicting a rising curve of the threats from China and Russian and a nearly flat line of likely U.S. sealift capability to meet that threat. To adjust, Mewbourne said he is working on ways to harden his fleet of tankers and ammunition and cargo ships and to train his crews of primarily civilian mariners to survive in contested environments.

To prepare for a major war, the U.S. merchant marine and Military Sealift Command both must grow. At present, the civilian merchant marine, which during wartime would become a naval auxiliary force, possesses around 180 U.S.-flagged vessels. The other roughly 800 cargo ships working for U.S. companies legally are registered in foreign countries mostly in order for their owners to avoid U.S. regulations.

“The largest increases CSBA proposed would go to refueling capabilities, from the current 21 tankers and fleet oilers to 69; the towing and salvage fleets, from five to 25; and maintenance and repair, from two tenders to 17,” Kreisher wrote.

The report also recommended growing cargo and munitions support from 12 ships to 25 and creating a combat search-and-rescue and increasing medical care capability from the current two large and aging hospital ships to seven. That would include platforms for CSR helicopters and MV-22 tilt-rotor aircraft and small “expeditionary medical ships,” based on the expeditionary fast transports currently being built.

This larger logistical support force would include several new ship types — including a variety of tankers and smaller oilers able to refuel combatants and commercial tankers to move fuel forward to replenish fleet refuelers. The CSBA report also urged that munitions ships be able to reload vertical launching system tubes at sea and that new tenders be able to repair surface combatants and even unmanned surface vessels.

The greater numbers and new types of support ships are needed, the report argues, to allow logistical support to continue despite the high attrition expected in a great power conflict, to provide support in contested waters, and to make up for the likely damage to forward support facilities such as Guam, the Marianas and Diego Garcia.