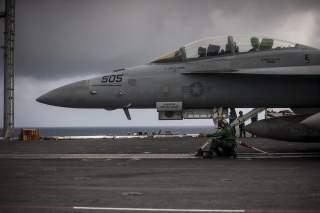 The efforts to deprive Japan of needed resources were long-running and widespread. The mix of submarines, carrier aviation and land-based air power was an effective combination for conducting an extensive campaign at long ranges, in spite of enemy defenses and a lack of local basing for Allied air power.

Despite plans for an invasion of the Japanese home islands, many senior airmen felt that a combination of a maritime blockade and strategic bombing could drive Japan to surrender. In any event, the use of atomic weapons forced a rapid surrender and ended the debate.

Nevertheless, it is clear that absent any direct attack on the home islands by any means, the maritime interdiction campaign had successfully brought Japan to the brink of surrender. Like any island nation, Japan was uniquely vulnerable to the interruption of sea traffic.

We do not think of China as an island nation. After all, it has almost double the land border of the United States and borders 13 independent countries.

But the land transportation links over these borders are extremely limited. The border terrain is unfavorable, dominated by desert, steppes, mountains and jungle. Border disputes with several countries, including Bhutan, India and Pakistan, have delayed or prevented development of transportation infrastructure along the PRC’s borders.

The total number of border “ports” along the Chinese border stands at 90, counting the newest connection to the Afghanistan border, but excluding airports. That number compares unfavorably with the 119 border crossings between the U.S. and Canada alone. The comparison is inherently unbalanced, in that the Chinese border is relatively undeveloped, while the U.S.-Canadian border has benefited from more than two centuries of continuous expansion.

The U.S. and Canadian road and rail networks are effectively linked, whereas Chinese railroads do not even share the same gauge — i.e. track width — as any of their neighbors excepting Mongolia and North Korea, and sometimes not even then. Continuous rail lines extend only into Russia, Kazakhstan, North Korea and Vietnam, requiring either bogie exchange or cargo crossloading wherever there is a gauge change.

The total cross-border Chinese cargo carried by rail in 2012 was 54.24 million metric tons, with another 64.9 million tons moved by truck. This is a fraction of comparable U.S. overland trade in that same year, where the rail systems moved 139 million tons with trucks moving 177 million tons. Roughly a fifth — 19 million tons in 2012 — of the PRC’s import flow by rail is coal mined in Mongolia.

There are only five long-haul rail lines crossing the border at all — three crossing from Siberia and two from Kazakhstan, and those lines carry more exports than imports. The primary reason for the expansion of the PRC’s rail crossings in the last five years has been to carry exports to markets rather than to import goods or resources.

The fifth line, Hunchun, has been closed for most of the last 15 years, but reopened in late 2013. In 2014, the Hunchun line moved comparatively little rail traffic, mostly coal.

While China has expanded and upgraded its border crossings in the last five years, they are limited in capacity by the infrastructure on both sides of the border. All five lines are far more limited than their U.S. counterparts, because they tend not to be double tracked — less than half of China’s rail lines are double tracked — and do not have the high height limits of U.S. trains, which can carry double-stack containers.

China’s road systems are also substantially less developed, with long distances between markets and with limited capacity compared to the U.S. interstate system. Also unlike the United States, China’s international land ports are concentrated in five locations, all rail and road-served. 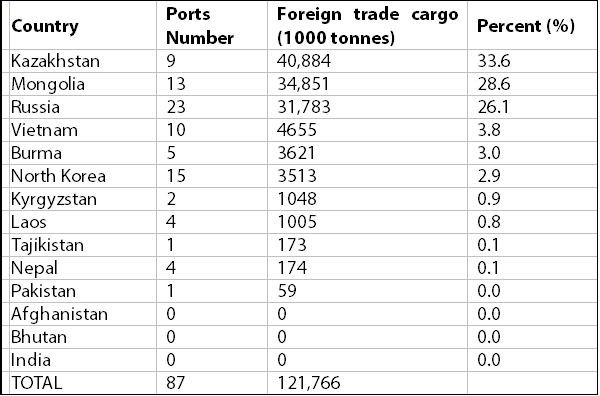 The table above shows China’s total cross-border cargo movement traffic for 2012, which includes river, road and rail traffic. Air traffic and petroleum pipelines are not included.

Notably, there were no exploitable land routes to Afghanistan (even now, the road only goes to the PRC side of the border) or Bhutan, which does not even have diplomatic relations with China. Despite the fact that China is India’s largest trading partner, the countries do not exchange goods across their disputed border.

China has three international oil pipelines, crossing from Russia, Kazakhstan and Burma. Officially, the total capacity is 980,000 barrels per day, but this number is deceptive. The largest capacity pipeline, through Burma, has yet to move more than test quantities of oil, although it has been moving natural gas.

The Sino-Burmese oil pipeline is limited by the fact that while the pipeline exists, the oil has nowhere to go once it reached the Chinese terminus in Kunming. As of this writing, China’s Kunming refinery has not been built — and there are no internal oil pipelines from Kunming to elsewhere in China.

China is not entirely self-sufficient in any of the non-renewable energy sources that it uses to provide electricity and transportation. As a result, China has two key vulnerabilities on the energy front.

The first is the distribution network within country, which is highly energy-intensive and largely dependent on oil. This ties together with electricity generation, in that China’s power generation capacity is mostly coal-dependent, and coal is dependent on surface transport for distribution. For 2013, coal provided 65 percent of China’s energy consumption, which has been a relatively constant figure for the last decade.

China meets 96 percent of its coal demand domestically. Chinese coal imports tend towards coking coal for industrial processes, versus steam coal for power generation. But the PRC imports the majority of its petroleum, and the maritime petroleum transport network involves long distance movement that the PRC cannot possibly protect.

Driven in part by low oil prices, China fills its strategic reserves while prices are low, maintaining at least a 30-day supply of imported oil — and probably closer to 100 days.

As with coal, China’s demand exceeds domestic production, but China imports much more oil, approaching 60 percent of its total requirement.

Petroleum import data alone gives an incomplete picture of China’s fuel requirements. Crude oil is simply sticky black goo with very little utility in its unrefined state. Refining is necessary to turn that goo into useable fuels. In 2013, China’s total refining capacity was 12.6 million barrels per day, behind only the U.S. at 17.8 million barrels and representing a comfortable overcapacity of about 24 percent.

The output of China’s refineries has typically focused on lighter distillates, tending towards diesel fuel and gasoline, which allowed China to become a net diesel fuel exporter in 2012.

This occurred despite the fact that China’s smaller, private “teakettle” refineries, which account for a quarter of the nation’s refinery capacity, produce no jet fuel components at all.

Overall, China’s expansion of its refinery capability within the past four years has left the PRC able to meet 98 percent of its demand for petroleum distillates, and capable of having a net export balance for all distillate fuels except naphtha. China’s vulnerability to supply interdiction is largely limited to crude oil, although as naphtha is a key ingredient for jet fuel, this remaining import dependency is still significant.

China’s trade across land borders is relatively low, but its sea trade is massive. Using figures from only the top 15 coastal ports, the volume of seaborne trade in 2013 came to 7.28 billion tons, up from 6.65 billion tons in 2012. Using 2012 figures, this means that international road and rail trade comes to less than 1.8 percent of the volume of freight transported by sea.

That disparity is likely to have increased in 2013 and 2014 as the amount of seaborne trade is increasing at a faster rate than any other transport mode in both relative and absolute terms.

Put another way, the annual movement of freight through all of China’s international borders is matched in under 60 days by Shanghai’s port complex alone. There is no conceivable condition under which China’s land trade routes could mitigate a maritime interdiction campaign.

With sea trade essentially a global phenomenon, the infrastructure is well-established and continuing to expand worldwide, without intermediate bottlenecks.