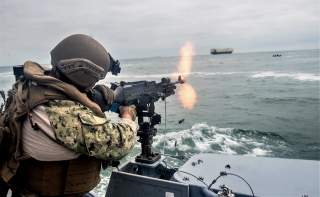 "We will escort our ships to the degree that the risk demands it," Esper said at a Pentagon media availability.

However, Esper stressed on Wednesday that he was not announcing that U.S. Navy ships and aircraft would immediately begin escorting U.S. commercial ships through the Strait of Hormuz to deter Iranian aggression.

"I'm not saying that right now," Esper said. "I'm just saying this is one of the things I'm going to see with CENTCOM next week as I understand their concept of the operations. Again, to the degree of course United States vessels need an escort, we will be there. We will be available to them."

Iran has recently seized foreign ships as tensions with the United States and Europe have risen sharply over the past few months, prompting U.S. Central Command to announce on July 19 that it was developing Operation Sentinel, a multinational mission to guarantee freedom of navigation in the Persian Gulf, Strait of Hormuz, Bab el-Mandeb Strait, and the Gulf of Oman.

"This maritime security framework will enable nations to provide escort to their flagged vessels while taking advantage of the cooperation of participating nations for coordination and enhanced maritime domain awareness and surveillance," a CENTCOM news release says.

The U.S. military will determine whether a U.S. commercial ship requires an escort if they face the threat of being stopped or seized, Esper said.

Esper said he will discuss with CENTCOM commanders exactly what escorting U.S. commercial ships would involve. He also explained that U.S. warships do not need to be right next to a commercial ship in order to protect it.

"As long as you're in the area that you can react quick enough to deter a provocation, that's the key," Esper said. "I don't necessarily mean that every U.S.-flagged ship going through the Strait [of Hormuz] has a destroyer right behind it."

Operation Sentinel is meant to stop the Iranians from taking provocative actions that could lead to a war, Esper said. Should the Iranians attempt to capture a U.S.-flagged commercial ship, the U.S. military would intervene.