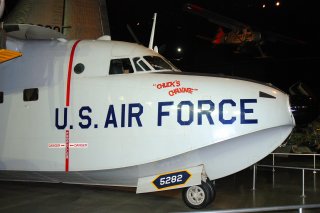 When is a seabird a workhorse?

When it is a U.S. military aircraft—and in this case, workhorse could aptly describe the Grumman HU-16 Albatross, a versatile amphibious utility aircraft that was designed so that it could also operate in snow and ice conditions with skis. It had a crew of three or four and could carry up to ten passengers.

The large twin-radial engine amphibious flying boat was developed after the Second World War for the U.S. Navy and the first prototype flew in October 1947. Gruman had previous experience developing amphibious aircraft, such as the Gruman JSF-6 Duck, and created essentially a larger version of the flying boat concept.

The United States Air Force also saw a potential and ordered a quantity of the aircraft, designated the SA-16As, for air-sea rescue operations.

During the Korean War, the SA-16 was used for combat rescue and gained a reputation as a rugged and reliable seaworthy aircraft. In total Grumman delivered 297 A models to the Air Force and most saw use with the Air Rescue Service, which was first established in 1946 before being re-designated as the Air Force's Aerospace Rescue and Recovery Service (ARRS) in 1966.

The designation of the airplane was changed to HU-16 in 1962.

In the meantime, Grumman developed an improved version that increased the wingspan by 16 and a half feet and installed larger aileron and tail surfaces. Many of the A models were later converted to this B configuration.

The HU-16 saw extensive combat service during the Vietnam War when it was used by the Air Force's ARRS, while the U.S. Navy employed modified HU-16C/D as search and rescue (SR) aircraft from coastal naval air stations including bases in Guam and Cuba. The HU-16 was also operated by the United States Coast Guard as a coastal and long-range open ocean SAR aircraft until it was supplanted by the newer HU-25 Guardian and HC-130 Hercules aircraft.

The Albatross was also an example of a military-designed aircraft that made a transition to the civilian world. In the mid-1960s the U.S. Department of the Interior used a small number of the flying boats in goodwill flights in the Pacific. The aircraft proved perfect when the U.S. government helped establish the Trust Territory Airlines to serve the islands of Micronesia before adequate runways were built on the islands.

In a strange twist of fate, the Albatross was also crucial in developing Row 44's satellite-based, in-flight Wi-Fi system that is now commonly used on modern commercial airliners. The company's founder, Gregg Fialcowitz, had reportedly become frustrated by the lack of Internet during his frequent business travel and saw the potential to provide a satellite delivery of the Internet to aircraft. He worked with David Cummings, a corporate pilot, who happened to have restored a Grumman HU-16B, which was used in the testing and development of the system that is now widely used on commercial aircraft.

The same plane that helped save many lives via rescue missions and has left its impact in other ways. It wasn't speedy but it was reliable, which is why even today the Albatross remains a workhorse with Air Forces around the world.