The U.S. Military's Clever Plan for How to Win a War with China 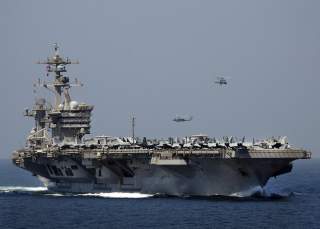 In a way, it’s a return to the past. The United States dispersed air bases to varying degrees—and in different parts of the world—during the Cold War.

The United States can no longer count on its Pacific air bases to be safe from missile attack during a war with China. On the contrary, a 2015 paper from the influential RAND Corporation noted that in the worst case scenario, “larger and accurate attacks sustained over time against a less hardened posture could be devastating, causing large losses of aircraft and prolonged airfield closures.”

Kadena Air Base in Okinawa, due to its relative proximity, would be hardest hit. To up the stakes, China in September 2015 publicly revealed its DF-26 ballistic missile, which can strike Andersen Air Force Base in Guam—nearly 3,000 miles away—from the Chinese mainland. Andersen and Kadena are among the U.S. military’s largest and most important overseas bases.

Enter Tinian. The lush, small island near Guam is emerging as one of the Air Force’s backup landing bases. On February 10, the flying branch announced that it selected Tinian as a divert airfield “in the event access to Andersen Air Force Base, Guam, or other western Pacific locations is limited or denied.”

In the Pentagon’s 2017 budget request, it asked for $9 million to buy 17.5 acres of land “in support of divert activities and exercise initiatives,” the Saipan Tribune reported. In peacetime, the expanded Tinian airfield will host “up to 12 tanker aircraft and associated support personnel for divert operations,” according to the Air Force.

Tinian is now a sleepy place.

During World War II, the 4th and 2nd Marine Divisions captured the island, which later based the B-29 Superfortresses Enola Gay and Bockscar which took off from Tinian’s North Field and dropped the atomic bombs on Hiroshima and Nagasaki. An arsenal during the war, most of its airstrips are now abandoned and unused. The island’s other former air base, West Field, is a small, neglected international airport.

The Air Force first wanted Saipan for its airfield. Very close to Tinian, Saipan has 15 times the population, a larger airport and a harbor. But this proposal met opposition from local activists due to the effect on “coral, potable water, local transportation and socioeconomic factors on surrounding communities,” Stars and Stripes reported.

The opposition even included the pro-business Saipan Chamber of Commerce, which worried that Tinian’s rusty airport would miss out on the flood of Pentagon spending. Saipan’s airport is also overcrowded—with locals not happy about the prospect of hundreds of airmen flying in for military exercises lasting up to eight weeks ever year.

In a way, it’s a return to the past. The United States dispersed air bases to varying degrees—and in different parts of the world—during the Cold War, but as the threat of a Soviet missile attack evaporated and post-Persian Gulf War budget cuts hit hard in the 1990s, the trend shifted toward larger mega-bases that operate on economies of scale.

But dispersed bases are more survivable, RAND’s Alan Vick noted in his 2015 paper:

“Dispersing aircraft across many bases creates redundancy in operating surfaces and facilities. This enhances basic safety of flight by providing bases for weather or inflight-emergency diverts. It also increases the number of airfields that adversary forces must monitor and can greatly complicate their targeting problem (in part by raising the prospect that friendly forces might move among several bases).

“At the least, dispersal (because it increases the ratio of runways to aircraft) forces an attacker to devote considerably more resources to runway attacks than would be the case for a concentrated force. It also greatly increases construction and operating costs to spread aircraft across many major bases. To mitigate these costs, dispersal bases tend to have more-modest facilities and, at times, might be nothing more than airstrips.”