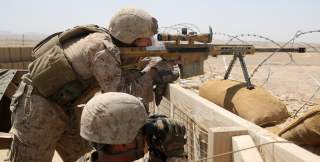 The Pentagon’s fringe-science Defense Advanced Research Projects Agency has just released a video of its Extreme Accuracy Tasked Ordnance, or EXACTO, in action.

The video depicts a target … and another aim point a couple feet to the right. The EXACTO bullet arcs toward the second aim point.

Just before it hits, it curves left to strike the first target.

EXACTO is the solution to a problem. American snipers in Iraq and Afghanistan struggled to hit moving targets in high wind and dust. The idea is that a guided bullet will help sharpshooters to hit their marks faster and more accurately, whatever the conditions.

The DARPA announcement of the test provided few details. It described EXACTO as a “maneuverable bullet and a real-time guidance system to track and deliver the projectile to the target, allowing the bullet to change path during flight to compensate for any unexpected factors that may drive it off course.”

We can glean a few more details of EXACTO from the original DARPA solicitation from 2008. EXACTO consists of a .50-caliber sniper rifle, a guidance system to send targeting information to the projectile and a bullet that can change its trajectory in mid-flight.

Exact specifications are classified—range, maximum crosswinds and how slow a target must be moving. However, DARPA did reveal that it’s looking for a bullet that has the same energy and momentum as current M33 .50-caliber rounds at all ranges greater than 300 meters.

DARPA would also prefer the EXACTO system weigh no more than 46 pounds, or the same as the current M107 sniper rifle with a scope and tripod. EXACTO’s power supply should last for a 14-hour mission, and should be compatible with existing sniper rifles such as the M82A1 and M107.

The agency wants “secure and tamper-proof design to prevent misuse and exploitation of any portion of the system if obtained by an adversary.”

DARPA also wants the weapon to be affordable, which raises the question of exactly how expensive these magic bullets will be. Because if the cost is low enough, it’s quite possible that in the near future every ordinary infantryman will shoot guided rounds.

That’s speculation, of course. All we can see for now is a single bullet hitting a stationary target under laboratory conditions. Who knows how well EXACTO will work on a real battlefield.