The U.S. Navy’s Block V Virginia-class Submarines Are Some of the Most Advanced Subs in Existence 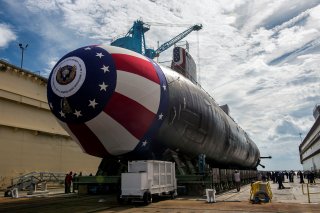 The U.S. Virginia-class submarines are among the most capable in the world—and the final Block V iteration is an apex predator.

The Virginia-class design “was developed to be less expensive and better optimized for post-Cold War submarine missions than the Seawolf-class design,” which was intended to be the United States’ underwater heavy-weight with which to attack underwater Soviet strongpoints, according to the Congressional Research Service.

One of the noteworthy technologies associated with the Virginia-class submarines are their pump-jet propulsion, which differs significantly compared to conventional Navy screw propellers. Quite a few pump-jet designs exist, though, in essence, all rely on a pump-type system to take in and spit out seawater.

Pumpjet-type propulsion allows for a higher top speed than a screw-type propeller—and more importantly, they are quieter and make detecting a submarine more difficult.

One analysis explains that the newer Block IIIs have “a new sonar array and large diameter vertical payload tubes.” Amazingly, a full twenty percent of the Block IIIs are redesigned.

This necessary design change facilitates lengthened Virginia Payload Module section, which increases the number of Tomahawk cruise missiles each submarine can pack onboard. Previous Virginias could carry thirty-seven Tomahawks—the Block Vs can pack up to sixty-five Tomahawk missiles on board.

The Navy’s strategy of incorporating incremental changes into the Virginia-class is an exercise in practicality. The Navy is an incredibly risk-averse institution and even more cautious with nuclear submarines.

New submarine classes must undergo extremely stringent testing and evaluation periods to validate new technologies and new designs. But by gradually introducing changes and overall improvements, the Navy can retain the Virginia-class name while also bringing what are essentially different submarines into service at a quicker pace than would be typically possible.

The Fiscal Year 2022 defense policy bill, which was forged via a compromise agreement by the House of Representatives and the Senate, provides the financial resources for a slew of new Navy construction.