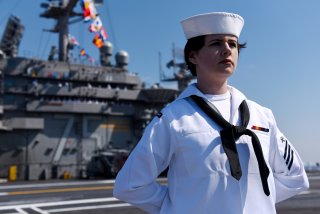 The Navy concept is to refine requirements through an exploration of various shapes, sizes and draft options to identify the optimal blend of speed, maneuverability and mission task support technology.

“These studies contracts will allow the Navy to harvest the learning from our land- and sea-based prototyping efforts and work directly with industry to refine the requirements for an affordable, reliable, and effective Large Unmanned Surface Vessel and reduce risk for a future design and construction competition,” Capt. Pete Small, program manager for the Unmanned and Small Combatants at Naval Sea Systems Command, said in a Navy report.

While specific weapons have not at this time been decided, as the platform may function purely as a sensor, the Navy and various vendors are exploring a range of options, to include weapons integration.

What might some of the options be? Perhaps offerings will present hull designs intended to launch drones, integrate Vertical Launch Systems and carve out specific areas for advanced sensors. It may function primarily as a payload or sensor platform, or also incorporate some Littoral-Combat-Ship inspired mission-package type systems to enable sensors to perform anti-submarine warfare, surface attack and countermine missions.

All of this may increasingly be possible for an unmanned system through artificial intelligence automation, also known as AI-enabled automation, allowing for autonomous operations and long-range, networked sensors enabling humans to control the ship’s operations from safer stand-off distances.

One of the handful of vendors seeking to implement this vision is Lockheed Martin, the LCS Freedom variant-maker now looking at adding VLS to the design and adding AI-enabled systems to perform Hull Mechanical & Electrical functions, Joe DePietro, vice president of Small Combatants and Ship Systems for Lockheed Martin, told the National Interest in an interview.

AI and automation are, among other things, intended to reduce the hardware footprint on a ship and free-up design space by synthesizing otherwise disparate sensor and information-gathering functions into a single system. Advanced AI-empowered algorithms can gather data, perform analytics and autonomously direct a range of integrated functions.

“With HM&E automation, you can put in the command for a ship to go a certain speed and it can achieve that speed and, for instance, transfer fuel to start a generator. It can establish the kinds of integration you need to control the fluid system,” DePietro said.

This kind of information pooling and analysis can massively reduce the procedural workload, often called the “cognitive burden,” upon humans operating command and control and making decisions at safe distances.

“We plan to maximize the automation and remote control capability of the system to have the LUSV be able to expand with other sources and make sure ships can interact,” DePietro added.

Much of this is accomplished through what DePietro referred to as a common source library of data, software and technical infrastructure details; it informs Lockheed's Combat Management System now supporting the LCS, Aegis-capable destroyers and cruisers and unmanned systems such as the evolving LUSV.

Automation and AI can also be leveraged for fire-control and weapons integration, systems, which will need the proper interfaces and computer connectivity to perform combat functions. This could, for example, coordinate targeting information and effectors, interceptors and weapons by collecting data and in some cases identifying the optimal weapon.

“With AI and automation-related weapons attack, there will always be a man in the loop with the exception of ‘extreme self-defense mode.’”