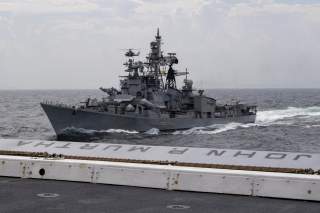 The U.S. Navy’s new frigate may not be armed with enough missiles to defeat Russian and Chinese warships, according to a new report.

FFG(X) is the Navy’s attempt to resurrect frigates, which are essentially small destroyers. The last frigates in the American fleet was the Cold War Oliver Hazard Perry class, which was retired by 2015. The Navy wants 20 of the new frigates, with the first acquired in late 2020. The Navy has asked for $1.3 billion in the FY2020 defense budget for the first vessel.

The Navy has not fixed on a design, though five American and European shipbuilders have offered their versions, which range from a trimaran hull to 6,000- and 7,000-ton vessels.

But regardless of which design is chosen, one issue could be a lack of missile launchers, according to a report by the Congressional Research Service, which is Congress’s analytical arm. The FFG(X) will only have 32 Mark 41 Vertical Launch System tubes, which are missile launchers – actually more like silos – embedded in the deck.

An arsenal of 48 missiles sounds formidable, but the DDG-51 Arleigh Burke-class destroyers mount 96 VLS tubes, which raises the question of how much bang for the buck the FFG(X) provides. “Supporters of requiring the FFG(X) to be equipped with a larger number of VLS tubes, such as 48, might argue that the FFG(X) is to be roughly half as expensive to procure as the DDG-51 destroyer, and might therefore be more appropriately equipped with 48 VLS tubes, which is one-half the number on recent DDG-51s,” CRS said in its typically guarded language. “They might also argue that in a context of renewed great power competition with potential adversaries such as China, which is steadily improving its naval capabilities, it might be prudent to equip the FFG(X)s with 48 rather than 32 VLS tubes, and that doing so might only marginally increase the unit procurement cost of the FFG(X).”

To be fair, CRS also presents the case for a 32-tube frigate. “Supporters of requiring the FFG(X) to have no more than 32 VLS tubes might argue that the analyses indicating a need for 32 already took improving adversary capabilities (as well as other U.S. Navy capabilities) into account,” says CRS. “They might also argue that the FFG(X), in addition to having 32 VLS tubes, is also to have a separate, 21-cell Rolling Airframe Missile (RAM) missile launcher [an anti-aircraft system] and that increasing the number of VLS tubes from 32 to 48 would increase the procurement cost of a ship that is intended to be an affordable supplement to the Navy's cruisers and destroyers.”

Before Congress approves funding for the FFG(X), CRS recommends legislators ponder several questions. How much more expensive would the frigate be with 48 instead of 32 VLS tubes? Could the ship be inexpensively designed to go from 32 to 48 tubes at a later date?

The question boils down to this: should a warship be packed to the gills with weapons? The Soviet navy, and today’s Russian fleet, opt for ships far more heavily armed than their Western counterparts. But that can come at the expense of other desirable qualities, such as endurance at sea and ammunition reloads (Soviet warships were essentially one-shot weapons).

Ironically, if the FFG(X) project runs into headwinds, there is an alternative. And that would be the Littoral Combat Ship, a troubled design that itself may be one reason why the Navy needs frigates in the first place.