The U.S. Navy’s Ship Crisis Is Getting Worse and Worse 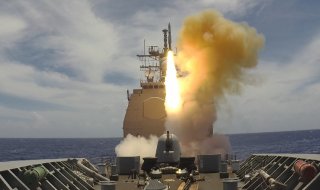 Even before the novel-coronavirus first surfaced in China in late 2019, the U.S. Navy was struggling to build the 355 front-line warships it said it needed simultaneously to confront China and Russia.

Now with the pandemic shutting down economies all over the world and compelling governments to invest trillions of dollars in stimulus measures, the fleet’s crisis has only worsened.

The Navy barely can afford the 295 ships it has. Never mind the 355 ships it wants.

“Cuts in defense spending seem inevitable,” Harlan Ullman, a senior advisor at the Atlantic Council, wrote in Proceedings, the professional journal of the U.S. Naval Institute. “To get to 355 ships, the Navy will need a revolution.”

The revolution would start with a clear understanding of the Navy’s purpose, Ullman wrote. “The current concept is for the Navy and Marine Corps, with the other services, to penetrate anti-access/area-denial defenses of China and Russia. The strategy to achieve those aims and win such a war won, however, is not so clear.”

Ullman proposed that deterrence -- that is, possessing reserves of overwhelming military power -- should be the core of the Navy’s new strategy. The implication is that day-to-day patrols all over the world -- “presence,” in military parlance -- should decrease in importance relative to deterrence.

Deterrence looks different respectively in Europe and Asia, Ullman explained. “In the Pacific, deterrence should aim to convince China it can be held within the first island chain [between Japan and The Philippines]. A sea denial strategy would convince China it cannot achieve sea control even within the first island chain, nor could it achieve territorial aims on Taiwan, in The Philippines or in the Ryukyus.”

“The first objective must be to convince China it will fail if it tries to expand its maritime frontier.”

In Europe, by contrast, the United States and its NATO allies should reorganize around the principle of “porcupine defense,” investing in “capabilities that would stall, disrupt and inflict heavy losses on any direct Russian military attack.”

That could include “massive numbers of drones; missiles; deception techniques and decoys; information and electronic warfare; guerrilla-type reserve forces; large improvised explosive devices; and other low-cost technologies aimed at disrupting and stopping Russian forces form the heart of this strategy,” Ullman wrote. “The ability to threaten Russia’s Baltic and Black Sea fleets is an integral part of a porcupine defense.”

To support this two-facet strategy, the Navy should cut existing ship programs and invest in “smaller, less-expensive, yet lethal warships,” according to Ullman. These might include 1,500-ton-displacement missile corvettes and diesel-electric submarines as well as unmanned air, surface and undersea vehicles.

What current ships should be first on the chopping block? Ullman is unequivocal. “The U.S. Navy can recapitalize by cancelling the last two Ford-class carriers and the Littoral Combat Ships, and forgetting about the future large surface combatant.”